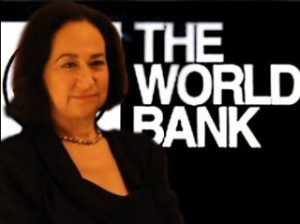 Karen Hudes studied law at Yale Law School and economics at the University of Amsterdam. She worked in the US Export Import Bank of the US from 1980-1985 and in the Legal Department of the World Bank from 1986-2007. She established the Non Governmental Organization Committee of the International Law Section of the American Bar Association and the Committee on Multilateralism and the Accountability of International Organizations of the American Branch of the International Law Association.

In 1999 Karen reported the corrupt take-over of the second largest bank in the Philippines. Lucio Tan, a crony of Joseph Estrada, then President of the Philippines, acquired stock owned by government employees in Philippines National Bank (“PNB”) valued more than 10% of PNB’s outstanding capital without disclosure, as required by Philippines securities laws. Tan owned Philippines Airlines, in default on its loans from PNB. The government of the Philippines loaned $493 million to PNB after PNB’s depositors made heavy withdrawals. $200 million of a loan from the World Bank and a $200 million loan from Japan were cancelled. Estrada was ultimately impeached, and in 2007 an anti-corruption court in the Philippines required Estrada to refund graft he had plundered. The Bank’s Country Director in the Philippines reassigned Karen when she asked him to sign a letter warning the Philippines’ government that the Bank could not disburse its loan without a waiver from the Board of Executive Directors since the loan conditionality was not met. The World Bank’s Internal Audit Department refused to correct the satisfactory evaluation of the Bank’s supervision performance or the flawed report of the Institutional Integrity Department to the Audit Committee of the Board of Executive Directors. When the Audit Committee requested an audit of internal controls over financial reporting, KPMG, the external auditors, circumscribed the scope of their audit in violation of Generally Accepted Accounting Principles and Generally Accepted Auditing Standards.

Mr. Paul Volcker headed the 2007 inquiry into the Institutional Integrity Department. The Volcker Panel was discredited after sixteen staff employed in the Institutional Integrity Department received significant damage awards in compensation for abuses of authority to intimidate them during the Volker Panel investigation. A staff-member of the EU’s anti-fraud agency, Office Lutte Anti-Fraude, on the Volcker Panel wrote to Karen: “My Director General and I met with a number of European Executive Directors of the World Bank a few weeks ago to discuss the Volcker Panel report. At the meeting there was also discussion about governance issues. My impression was that the European Executive Directors are well apprised of all relevant issues at the Bank and no further comment by OLAF is warranted even if it was within our legal competence.”

Karen informed Senator Bayh, “[t]he ongoing cover-up is an indictment of the probity of US oversight at the Bank and I would encourage the Senate to request GAO to look into it.” Senators Richard Lugar, Evan Bayh and Patrick Leahy requested GAO to investigate “internal resistance to increased transparency and accountability at the World Bank.” In 2008 Karen’s Congressman, Representative Chris Van Hollen, noted “that [Karen's] claims and concerns have already been provided to the GAO…. and to the relevant congressional committees.” In 2009 GAO stated that it could not commence the inquiry “because of challenges we recently faced in gaining access to World Bank officials.” Senator Lugar asked what was delaying the GAO review during hearings on the World Bank’s capital increase.

Mr. Pieter Stek, then Executive Director for the Netherlands, and Chair of the Board Committee on Development Effectiveness, said: “In a multilateral institution which should be governed by the rule of law and high standards of probity the charge of concealment from the Board of Executive Directors of information relevant to the exercise of its duty of supervising management and the persecution of the person who brings this to light is extremely serious. If correct, which I believe, this poisonous cocktail undermines good governance and ultimately the effectiveness of the Bank in fulfilling its mandate. I shall continue to assist Ms. Hudes in her efforts to have due process brought to bear, preferably by the Bank itself, on these issues of governance.”

David Brooks wrote: “Then there are violations, when someone intentionally breaks the rules. Errors can be very hard for outsiders to detect. It was people inside the companies who were most likely to report fraud, because they have local knowledge. And yet 80 percent of these whistleblowers regret having reported the crimes because of the negative consequences they suffered. This is not the way to treat people who detect error.”