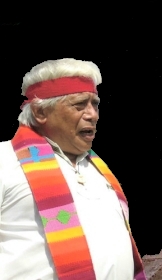 Hunbatz Men - Mayan Elder & Solar Priest lives in Merida, Yucatan, Mexico. He is a Shaman, Daykeeper and teacher of traditional Mayan wisdom passed down to him through generations of Mayan elders. He has committed his life to transmitting these sacred teachings to others who have an interest in the vision and practices of ancient indigenous cultures. He believes that modern peoples can benefit from understanding the world view that the teachings of the Mayas express. This path of sacred sacred wisdom teachings is offered through Maya Mystery Schools, and draws students back into the higher consciousness of the universe, back into Cosmic Consciousness, which they have forgotten. The ultimate purpose of Hunbatz Mens work is to restore our planet to harmony with natural and cosmologic cycles. He believes that the way to help Mother Earth and her children return to a state of harmony is to raise human consciousness once again closer to the Cosmic Consciousness of advanced ancient peoples.

In 2008 Hunbatz Men founded and is Director of the Cosmic Initiatic University of Yokhah Maya in Merida, Yucatan, Mexico. This program offers study in depth of the mystic knowledge and hidden practices of Maya yoga, including philosophy and practices. Education in yokhah (yoga) provides a foundation in cosmic philosophy and practice of techniques based in ancient Maya knowledge and traditions, guiding us to live in harmony with the cycles of our Mother Earth, Father Sun, and the Cosmos.

Grand Elder Grandfather Cirilo Perez Oxlajs Mayan spirit name is Wakatel Utiw, which means Wandering Wolf in his native language. He is regarded as the Voice of the Jungle and the Messenger of the Maya; we also know him as 'Tata' which most affectionately, 'Grandfather' in his native language. Wandering Wolf is responsible for guiding us through a prophesied evolutionary transition called the Shift of the Ages. He relays not only potent messages filled with hope and promise, but also grave warnings about the changes we must make. He tells us we are living in the time when the ancestors, as well as men and women of wisdom, return to usher in a new era of global harmony and a new phase of human evolution.