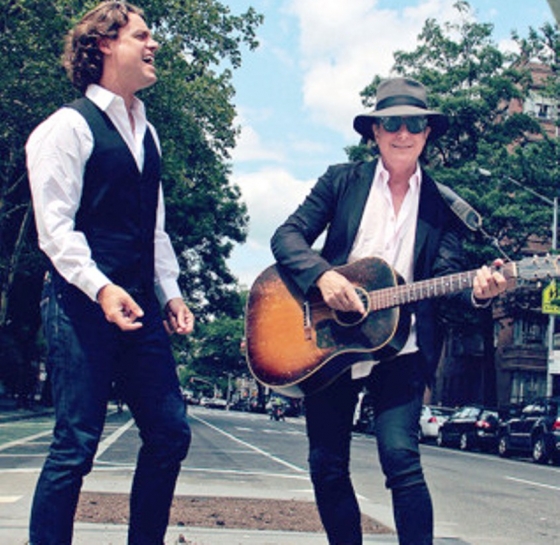 ON  THE RAY SHASHO SHOW

Jann says “A Stereopticon is a classic slide projector that combines two images to create a three-dimensional effect. The title fit since there are the two of us and the album was recorded live on two-inch tape, the classic analog recording technique.“

Gary explains how the two create their new songs, “There is a lot you can do with just voice and guitar; we took influences from all over the Americana spectrum, and added a few odd surprises.”

“Secret Wings” was one of their first collaborations. Jann says, “it’s about the City beating you down and making it through the noise and craziness, especially in New York City!” Created by DeAngela Napier, “Secret Wings” is the duo’s new music video and available on YouTube. “Secret Wings” features scenes of the City, from jarring cabs and graffiti to comfort zones like Jann and Gary playing at the Rockwood Music Hall and breathing in Central Park. (In fact Gary will be sitting in with Jann at the Rockwood Stage 3 on the 21st of December at 8:30 PM. After that date, the two will be back on the road in Germany, United Kingdom and the U.S.

The jazzy “Fair Weather” is about two-faced people, while the Canned Heat-influenced “Walking And Talking” and the dramatic “Take Your Medicine” fit perfectly on blues radio.

Some songs “Nobody’s Talking” (about cellphone users who text in the company of friends) and a few with double-entendres: the sea shanty “Jewel Julia” and acoustic blues song “Let No One Come Between Us” were co-written with Dan Beck (who has collaborated with Dion DiMucci, the Iron Cityhouse Rockers, and the Rascals’ Felix Cavaliere). Dan also contributed to the Renaissance-esque “Overture,” and the pop-influenced “Well of Loneliness.”

Dan co-wrote “Mary Magdalene,” which has found support from a variety of New York City-area stations as the song supports the people in Long Island, Queens, Staten Island, Brooklyn, and New Jersey still struggling to get their lives back to normal since Oct. 29, 2012’s Superstorm Sandy. (Gary and Jann encourage their fans to donate to the Island Park Volunteer Fire Dept., P.O Box 500, Island Park, NY 11558 or online at 2ndbattalion.org/departments/island-park.)

STEREOPTICON is produced by Jann, Gary, and Dan, who call themselves “Dr. Tre.” The album was engineered by Jack McKeever (Joan As Police Woman, Anna & Kate McGarrigle) and Jason Candler (Queen Esther), who also plays soprano sax on “Nobody’s Talking” and tenor sax on “Well of Loneliness.” STEREOPTICON was mastered by Ben Kesler (Robert Randolph and the Family Band).

While Jann and Gary write as collaborators in the Roots Music Genre, both artists are eclectic musicians that tour throughout the world on their own.

Gary’s co-written hits with artists Joan Osborne: “Spider Web,” and Jeff Buckley’s “Grace” and “Mojo Pin.” He’s worked extensively with Captain Beefheart. ROLLING STONE says Gary is, “One of the best and most original guitarists in America…a modern guitar miracle.” He just received the Premio Ciampi Lifetime Achievement Award in Italy, named for one of Italy’s most famous songwriters. In 2014, Gary received the Ambassador’s Award for Cultural Diplomacy from the US Consul General of Milan. His long-awaited GARY LUCAS’ FLEISCHEREI: MUSIC FROM MAX FLEISCHER CARTOONS will be released on Cuneiform, February 2016. He is currently collaborating with Steve Kilbey (The Church), and Chris Shinn (new lead singer of Live), and was (this fall) Music Director of “State of Grace,” a multi-artist Australian tribute to Tim and Jeff Buckley.

Born in Germany and raised in Kenya, South Africa and the United States, Jann Klose is currently collaborating with Ann Hampton Callaway, Renaissance’s Annie Haslam, Hall & Oates’ John Oates and The Yardbirds’ Jim McCarty. In 2015 Jann and his music appeared in the short film THE BEAUTY OF DISASTER (Glimmer Girl, USA) and the award-winning Australian feature documentary A VENUE FOR THE END OF THE WORLD (BrinkVision, USA). His most recent album, MOSAIC won three 2014 Independent Music Awards and charted for several months on the AMA and Roots Rock charts.

Gary and Jann both worked on the movie GREETINGS FROM TIM BUCKLEY (Tribeca Film/Focus/Universal). Jann is the singing voice of Tim Buckley, while Gary consulted and played guitar. Tony Award winner Frank Wood plays Gary in the film.