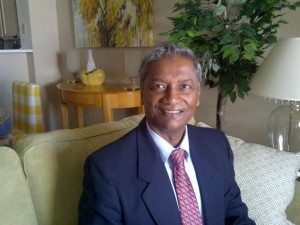 Prior to ordination, Reverend Ernie worked in the non-profit sector as a Job Coach for adults with disabilities, a Volunteer Coordinator, and, as a Financial / Credit counselor. He volunteered as a phone hotline Lay Minister at a mega-church in Orange County, California. He also worked in a Fortune 500 Aerospace company as a Project Financial Analyst prior to his dedication to supporting non-profit organizations.

Reverend Ernie was born and raised in a Christian family in India. He studied at a Methodist school for six years in South India. During his childhood in India, he and his family lived among many religious groups such as Hindus, Muslims, fellow Christians, Buddhists and Sikhs.

He emigrated to America at age 18 in 1964 shortly after high school graduation. Living in the Los Angeles area, he became a naturalized USA citizen in 1976. Reverend Ernie has learned extensively about other religions and belief systems through his personal studies. In America as an adult, he’s actively attended several churches including Catholic, Protestant, Methodist, Unitarian and Meta-physical.

He was ordained by the Universal Life Church in January 2011. He’s developed an Interfaith ministry, which respects all loving religious and spiritual beliefs.