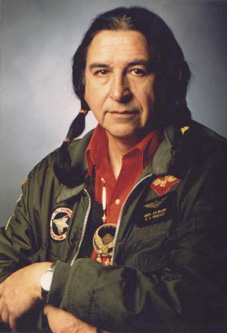 Ed McGaa (Eagle Man) is a registered tribal member of the Oglala Sioux OST 15287 and was born on the Pine Ridge reservation. He received his Bachelor's degree from St. John's University and earned a law degree from the University of South Dakota. He has studied under Chief Eagle Feather and Chief Fool's Crow, both influential Sioux holy men. He is honored by the Sioux for having participated six times in the Sun Dance ceremony. He also served as a fighter pilot in the Marine Corps in Vietnam, flying 110 combat missions in F-4 Phantoms, receiving 8 air medals and 2 Crosses of Gallantry, and was recommended for a Distinguished Flying Cross.

Ed is the author of the seven books: Red Cloud - Biography of an Indian Chief, Mother Earth Spirituality - Healing Ourselves and Our World, Rainbow Tribe - Ordinary People Journeying on the Red Road, Native Wisdom - Perceptions of the Natural Way, Eagle Vision - Return of the Hoop, Nature's Way - Native Wisdom for Living in Balance with the Earth, and most recently, Crazy Horse and Chief Red Cloud - History of the Sioux and its Warriors.