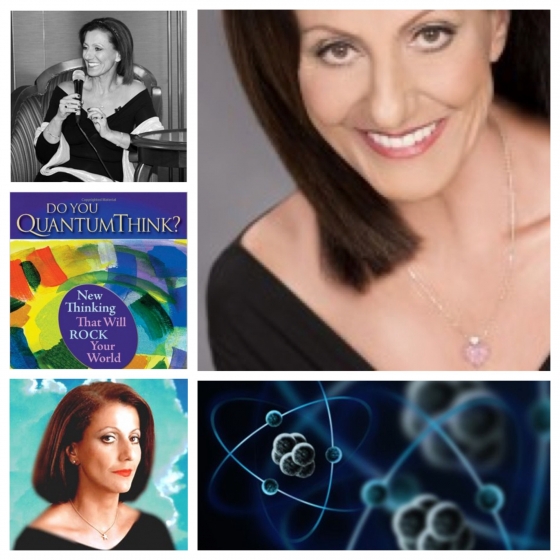 Dianne Collins is an original thinker and is one of the first and foremost thought-leaders of our time. She consults with executives in the worlds leading corporations as well as with enterprising entrepreneurs, celebrities, students and evolutionaries in the new system of thinking she created, QuantumThink. Her life is dedicated to people living spirited, joyful, and masterful lives through leaps in awareness and the expansion of their relationship to reality. She is a master of translating ancient knowledge into modern quantum terms that provide a practical and transformative platform for the way we conduct our business and personal affairs. Dianne has been interviewed on over 100 radio and TV shows, a popular returning guest.

Do You Quatum Think: New Thinking That Will Rock Your World by Dianne Collins. Ms. Collins is an important thought-leader of our time; her workshops and consulting sessions are widely sought after by a clientele that includes politicians, celebrities, and CEOs alike. This ambitious book is the culmination of her lifes work, and it unveils the powerful secrets she has uncovered in the process. These secrets bridge the gap between ancient wisdom and modern science to reveal a power that exists in each of us if only we learn how to access its source. The key to this access is a concept she calls QuantumThink®, which explains that our thinking is not free but is conditioned by our world view. Only with this knowledge are we able to pursue the lives that we truly desire.

This book is much more than a self-help book, and Dianne Collins is more than simply the latest motivational speaker. Do You QuantumThink? asserts that the human race is at a critical juncture in its development and it is our collective responsibility to evolve our thought process or face the consequences. Ms. Collins explains that our thinking has not evolved past an Industrial Age paradigm rooted in a mechanical world view. Einsteins relativity and the quantum physics of the 20th century initiated a process of dismantling this archaic model. Just as quantum physics redefined the physical world, the aim of Quantum Thinking is to reinvent perception in a way that is better suited for the shifting realities of modern times.

The message of Do You QuantumThink? is divided among 21 QuantumThink Distinctions which blend scientific knowledge, spiritual wisdom, and current philosophy into a practical modern approach that will attune the readers to the essence of our time and the ability to think in sync with it. Some important concepts that readers will draw from Do You QuantumThink? are:

- The power of Intent to manifest results in Observer-created Reality

- Listening as a dimension of being rather than a skill

- How Mind generates Emotion and how to use this dynamic energy to our advantage.