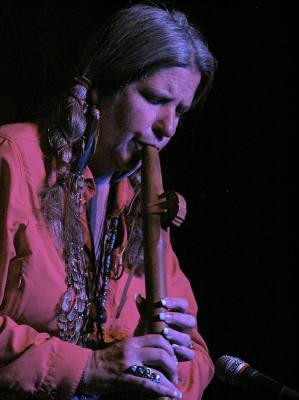 Debra was born in Huntington Beach,CA and was always drawn to the Native American way of life.

In 2009, Debra met Peter Lovio (Yaqui), (who became a close friend and her mentor), at Redbirds Children of Many Colors Powwow. He took her by the hand and introduced her to a flute maker and told her, “This is your next Spiritual Journey.” At that time she didn’t understand what he meant until the following week when she was at an open mic and he told her she was going to play. After she played (never playing an instrument before) she understood what he meant as it came natural to her.

Debra has put out one CD, and seven (7) years later plays her flutes for meditations, weddings and Celebrations of Life. You can also hear her play every third (3rd) weekend of July at Redbirds Children of Many Colors Powwow Flute icrcle, held at Moorpark College in Moorpark, CA where her journey began, and in December in Simi Valley, CA at Redbirds Blanket, School Supply and Toy Drive for the children on the Pine Ridge Reservation, SD.

Debra Delahunty is a big supporter of the Shadow Land Foundation, where her CDs can be purchased and the money will go to help the foundation provide wolf education for children of all ages. Inquire about the CDs and the wolves at their website.