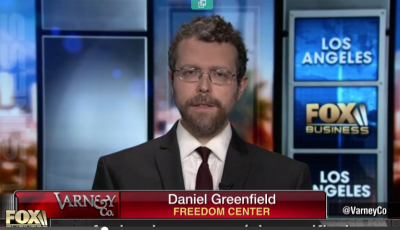 My name is Daniel Greenfield. I am a  Shillman Journalism Fellow at the David Horowitz Freedom Center. And my journalistic beat at Front Page Magazine, its blog, The Point, and my own blog, Sultan Knish, is everything from Islamic terrorism in Argentina to leftist politics in America.

From the Most Corrupt Village in America to exposing the truth about the Libyan War, peeling back the corrupt history of the NFL, documenting the hard truths about diversity terror migration, in depth pieces on terrorist attacks in Europe, across Israel and right here in this country, I cover it all.

"You are one of many people who have given me feedback that my reading and interpretation of that piece by Daniel Greenfield was of profound enlightenment," Rush Limbaugh said.

I was named a "hate group of one" by the Southern Poverty Law Center. The SPLC may not have been too happy that I caught them faking statistics.

I have appeared on FOX News (Tucker Carlson) and FOX Business to discuss my writing. And I'm a regular on radio shows from coast to coast.

My pamphlet, The Great Betrayal, documented the detailed history of betrayals and lies in Obama's wars, from Afghanistan to Iraq to Libya.

That series, along with my piece on how Carter had banned Iranian students during the hostage crisis have upended conventional media narratives.

My investigative pieces have included the story of Obama and Pfleger, which I broke months before the mainstream media. I also broke the story of many of Obama's radical clergy ties, including Farrakhan supporters, I revealed that the Vice-President of the Center for American Progress and the former senior adviser for Nancy Pelosi had participated in terrorist fundraising

I have covered assassinations in Argentina, Iran's meth empire , the coverup of Islamic genocide in Nigeria and the lost history of Harlem's Black Hitler. I broke the story of the Secretary of State recognizing a terrorist propagandist with an award as one of the International Women of Courage and exposed the falsehoods in Prince of Slaves, an Islamic propaganda film aired on PBS.

The scope of my writing covers everything from domestic American politics to creeping Islamism in Scotland and how foreign aid makes its way into the hands of terrorists to white aborigines in Australia, Islamist Imams in Libya,  flogging in the Maldives and the hunt for witches in the Muslim world.

My original columns appear at Front Page Magazine and my blog articles are syndicated at Family Security Matters, the Jewish Press, Right Side News, the Canada Free Press and Israel National News. My op eds have also appeared in the New York Sun, the Jewish Press and at FOX Nation.