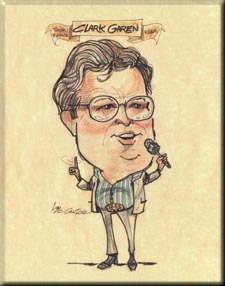 As a practicing attorney as well as a talk show host, Clark Garen brings unique perspectives to the events of the day, weaving in wit, legal expertise, and opinions that resist the easy Right or Left categories and strive for common sense. It's not Brainwash Television or Ambush Television--its television that lulls the viewer into thinking they are being entertained while they are really being stimulated to think!"

With 38 years of legal experience, a two year stint as an elementary school teacher, five years as a real estate developer, 12 years as a 900 telephone number information provider, 38 years in the collection agency business, and two and a half years hosting "Think Radio with Clark Garen", Clark can address a wide range of topics, including:

"Nitebites with Clark Garen" addresses a wide range of topics from the timely to the timeless. As Clark explains, "My interesting guests are individuals who risked their lives and their careers for what they believed in. People like Jocelyn Elders, who journeyed from poverty to become a prominent physician, but who refused to accept a the political position of Surgeon General until she was given a leave of absence from her teaching position so that she would be able to tell the truth without having to worry about paying the price of unemployment; John Lewis, who was one of the leaders who started the Civil Rights movement in the early 1960's by implementing Ghandi's form of non-violent protest; Author Clive Cussler, who had a difficult time in school because he was always looking out the window and dreaming of adventure, and later quit his job as a successful advertising executive to create superhero Dirk Pitt and "Raise the Titanic" while Jim Cameron was still preoccupied with even Alien space creatures; and Michelle Bell, an economically challenged black high school student in Fresno, California who was taught to sing by a dedicated public school teacher who gave him free voice lessons every day before school, and who was later able to repay this teacher by flying him to New York, New York to see him open on Broadway playing the role of "Joe" in Harold Price's revival of "Showboat".

It's no surprise that Clark finds these people interesting--in his legal practice, he relishes cases that emphasize the rights of the individual. "It might be unfashionable now", Clark explains, "but I've always admired Supreme Court Chief Justice Earl Warren, who dedicated his life to government service instead of the pursuit of money and power, and who understood that the primary purpose of the Courts was to protect every individual from oppression from any source, and especially from the Government." As Clark notes, this philosophy sometimes puts him at odds with the trends of the day. "In fact, I've taken that thinking to the point where in divorce cases, I enjoy helping couples to either stay together or separate with dignity, instead of acting like a parasite by feeding my anger to generate more work and income for my law firm."