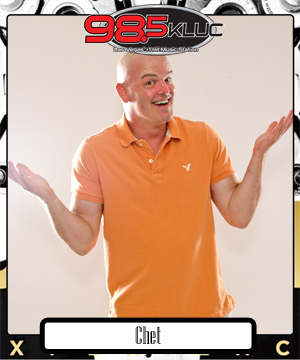 Chet Buchanan is the host and creator of 98.5 KLUC’s Chet Buchanan and the Morning Zoo! Since it’s inception in 1999 it has consistently been one of the highest rated and most beloved radio shows in Las Vegas. In addition to anchoring the morning show, which he was named “Best of Las Vegas” by the Las Vegas Review-Journal for, Chet can be seen just about everywhere in Las Vegas.

Many Las Vegans know Chet from his work on the court at UNLV Runnin’ Rebel Basketball games, appearing as a frequent contributor on Fox 5’s “More at Four,” or holding down a packed schedule hosting multiple corporate, civic, and charity events.