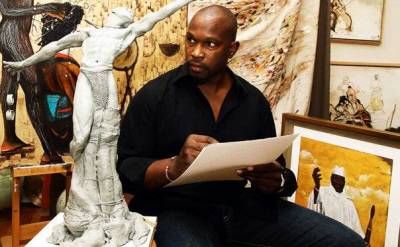 Born 1961 in Niagra Falls NY; he is the seventh of nine brothers and sisters. After earning a Bachelor of Science in Graphic Design from Southern Connecticut State University, he then graduated from the Fashion Institute of Technology in New York. After graduating, Chaz moved to Paris, France. He worked for the fashion magazine Joyce, where he illustrated the lines for various haute couture houses.

His work has been exhibited worldwide. He is well known for his portrait of Supreme Court Justice Thurgood Marshall, which was acquired by then Senator Barack Obama. It then hung in the Oval Office during his presidency, and is subsequently now resides in the private home of Michelle and Barack Obama. The artist Chaz Guest’s vision of the mythical Buffalo warrior tells a tail of a boy born into slavery. When he becomes a man he in-list in the military to fight in the Civil War. Upon his death in battle, he is reborn to become a super hero.

Chaz Guest is an American artist who creates paintings, drawings and sculptures that are original, inspiring and breathtaking. Over the past 20 years his work has reached an ever growing list of esteemed private and public collectors, including the President of the United States, Barack H. Obama.

He has introduced his patrons to a pallet of Pozulli red, Egyptian blue, and Naples yellow. Everything about his work is unique, from the linen canvas to the use of ink and oil, to the actual subjects of the paintings themselves.