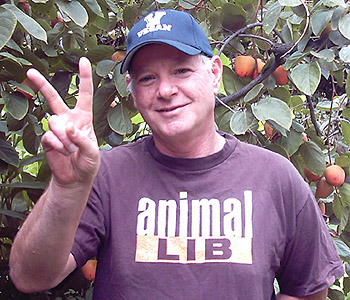 Bob Linden, vegan for 29 years, animal lover and dog-spoiler, is the host and executive producer of the listener-supported non-profit production GO VEGAN RADIO WITH BOB LINDEN – the first-ever mainstream-media vegan animal liberation, health, and environmental program, now broadcasting for 12 years, having been heard on the Air America radio network, CBS and Clear Channel radio stations, XM, iTunes, TalkStreamLive, stitcher/GOVEGAN), with archives at GoVeganRadio and syndication starting soon on the Genesis Communications Network, the fastest growing radio talk network in the world – where Bob’s program will become its first “food” show.

Bob’s activism, community involvement, and promotional and marketing efforts have been featured on the CBS Evening News, CNN, in the New York Times, AP, UPI, and elsewhere. He was named Program Director of the Week by Billboard Magazine and received ADDY awards for writing the best radio commercial in Nebraska one year, as well as for TV spots and billboard campaigns.

He is a graduate of Queens College of the City University of New York and Stuyvesant High School and PS 152 in Manhattan.