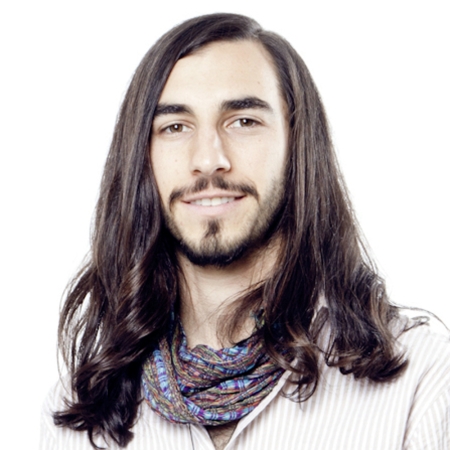 For nearly half a decade Andrew Jonathan (AJ) BLOCK has advocated the path to deeper connection through sound. AJ is one of New York City’s premier didgeridoo players and is the co-founder of the didgeridoo awareness organization known as Didge Project. Having performed for audiences all around the world, AJ has brought the didgeridoo into many new contexts including therapeutic events at wellness centers and genre defying music ensembles. Ultimately AJ sees the didgeridoo and its emphasis on breath control as one of the most powerful tools for self-healing and empowerment.

Originally from Los Angeles, California, AJ took up the piano at a very young age and switched over to trombone at age 12. He pursued jazz studies through high school and college and was determined to be a musician when he got out. In his travels after college graduation he was introduced to the didgeridoo and the use of sound as a healing tool. He tried playing the didgeridoo with this new outlook and his life went in a completely new direction. Having the brass technique from his trombone training and the vision of incorporating meditative practices into music making, AJ rapidly developed a didgeridoo style that drew on his many influences yet came from a deep place.

Shortly after moving to New York the didgeridoo began to open many doors for AJ and his friend Tyler Sussman. The two soon founded Didge Project and began bringing the didgeridoo into many different environments. Early collaborations combined the instrument with healing work (such as acupuncture and reiki), yoga classes and eventually dance parties and world music events. Didge Project soon became a well known organization in the New York community of consciousness.

As the director of Didge Project, AJ saw the need for a community of didgeridoo players in New York and began organizing gatherings and workshops to teach how to play the sacred aboriginal instrument. There was enough demand and interest that AJ became one of New York’s only full-time didgeridoo players and teachers. He now travels extensively bringing the didgeridoo and his work around the world.

With Didge Project co-founder Tyler Sussman, AJ has produced two records: 2009’s “Didgeridoo Meditation: An Odyssey Through Consciousness” and 2011’s “As One.” In India he recorded a single with flute master Navin Iyer which has been released as “Bansuri Meditation.” He is constantly working on new music and collaborations.

AJ currently lives in Brooklyn, NY where he aims to spread awareness for the didgeridoo, a tool he believes will do a great deal to elevate humanity.