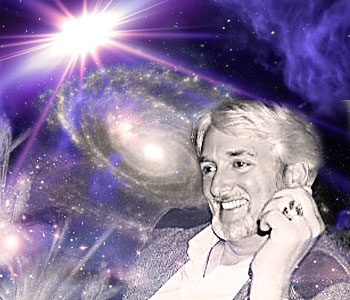 Adam is an internationally acknowledged expert in the fields of Physics, Atmospheric Dynamics, Geophysics, Rotating and Resonating Electromagnetic Systems, and Environmental Global Modeling.

Taking the advice of his friend and mentor, R. Buckminster Fuller, Adam has maintained a "synergistic, global view" within a multi-disciplinary scientific background. From this perspective, Adam offers unique insights into the changes humankind has effected on our environment, and the adjustments our future requires of us now.

Adam Trombly, Director of Project Earth for the Institute for Advanced Studies at Aspen (now also in Maui, Hawaii) has at age fifty-five proven to be one of the most influential and unorthodox scientists of his generation. In 1980 Adam and colleague Joseph Kahn designed and applied for patents for the Closed Path Homopolar Generator, a potentially revolutionary design for super efficient generation of electrical power. In June of 1982, International Letters of Patent were published by the International Patent Cooperation Treaty Organization. (Patent Publication Number WO82/02126)

In 1983 Adam began to dedicate his efforts to Project Earth. The late R Buckminster Fuller is quoted as saying, "Project Earth is a human design experiment. It will be incumbent on human beings throughout the Earth to become a living network, to demonstrate the power of working synergistically with their environment to insure a future worth living in."

In 1984 Adam was awarded the RJ Reynolds III Endowment for his efforts with Project Earth. I spoke to the late Mr. Reynolds during a Tesla Society Conference in Colorado Springs in 1988. He said: "Many people approach me and ask me and my family to support their work. After I heard Adam speak at two separate International Conferences, I approached him! I had never done that before. Adam has never ceased to amaze me. When you know Adam, you begin to see both the present and the future through his eyes. When you see the world like he does then there is this urgency that takes a hold of you to do whatever you can to make a difference for the better. I could not be happier with his work. We all need to listen to this man."

As the eighties progressed, copies of the Closed Path Homopolar Generator Patent had circulated throughout the world. One scientist, Paramahamsa Tewari, who was then Head of Quality Control for the Tarapore Atomic Power Station in Trombay, India, received permission to carry out experiments with the design. In 1986, Tewari (with the blessing of the late Prime Minister Rajeev Gandhi) published results of experiments carried out with a crude facsimile of the machine described in the patent. In the American Industrial Journal, Magnets, Tewari wrote, 'The test results have shown an efficiency of the machine above 250%." It was the first time in human history that claims of greater than 100% output had been independently verified by a bona fide third party using the description of the art provided by a patent document.

This further propelled Adam and Project Earth into the international spotlight. I ran into Adam next at the largest New Energy Technology conference ever held (even up to this point) in Hanover, Germany in 1987. Paramahamsa Tewari had brought his rather crude facsimile of the Trombly/Kahn generator. The next day, Adam gave one of those lectures with an impact that never seems to leave you.

Adam continued his research into new energy technologies with colleague David Farnsworth. In June, 1989, in New York City, Trombly and Farnsworth physically demonstrated a small solid state electrical transformer that measurably showed an efficiency of 54:1. Adam then walked down the street to the United Nations to give an address. From the point of view of one who witnessed this event firsthand, I can't believe the entire world didn't change as a result. One of the reasons I asked Adam if I could write this piece is because it is now ten* years later and the American people, in particular, have still not gotten the message that there is an entirely new and benign option to the current death spiral of humanity. As the result of ignoring the opportunity that was presented on that day in 1989, the world still suffers under the tyranny of fossil fuels and a global power structure which seems bent on the eradication of all species.

Today Adam continues to pursue the work of Project Earth in spite of the fact that in his view the destabilization of Planet Earth has reached critical, even nearly irreversible proportions.

"At this point I am recommending that people pray like they never have before for Divine or at least Benign Intervention. It is unlikely that the boys in Washington and other world capitals are going to implement any world healing policies unless the populations of the world rise up and unequivocally demand change. We don't have much time." AT

For my part, I want to thank Adam for allowing me to make this little, historical sketch my small contribution to the work of Project Earth. There is so much more I could say but I hope this gives you a better idea of who this man called Adam Trombly is.