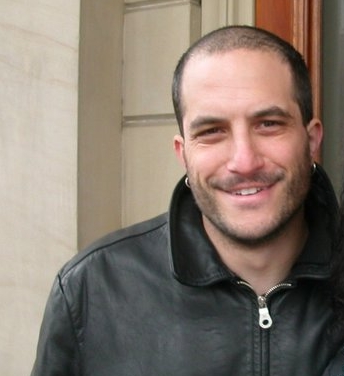 Adam Shapiro (born 1972) is an American co-founder of the International Solidarity Movement (ISM), a pro-Palestinian organization, the stated mission of which is to bring civilians from around the world to resist nonviolently the Israeli occupation of West Bank and previously the Gaza Strip. He became famous for visiting Yasser Arafat in his Mukataa (government palace) in Ramallah while it was besieged during the March 2002 Israeli military operation in the West Bank and Gaza.

Shapiro was born and raised in Brooklyn, New York and brought up in a Jewish home, but he doesn't "identify as Jewish. I see it as a religion rather than an ethnicity and, as I have no religious feelings, I don't regard myself as Jewish."[1]

His interest in the Palestinian cause started with his involvement with "Seeds of Peace," an organization seeks to foster dialogue between Israeli and Palestinian youth. In 2001, he was Co-Director of the Center for Coexistence in Jerusalem.[2] There he met Huwaida Arraf, a Christian Palestinian American, whom he married in 2002. In 2001 they co-founded the International Solidarity Movement (ISM).[3]

During the 2002 Israeli incursions into the West Bank and Gaza, ISM members would ride in ambulances in the hope of expediting their passage through checkpoints. Shapiro, who was living in Ramallah, volunteered with Irish activist Caoimhe Butterly to ride in ambulances. He recounts hearing that there were wounded people at the headquarters of Yasser Arafat, President of the Palestinian National Authority, and "several members of the movement marched by Israeli tanks into the Palestinian leader's office."[4] Trapped inside by Israeli fire towards the compound,[3][5] they remained overnight and Shapiro had breakfast with Arafat. Shapiro was allowed to leave when a doctor took his place.[3] At the time he left the compound, over 300 people were inside, mostly policemen, though also civilian employees at the headquarters.

Shapiro's visit to Arafat's headquarters was reported in the American press. A New York Post columnist labeled him "the Jewish Taliban", after John Walker Lindh, "the American Taliban" who was captured serving in the Taliban army in Afghanistan. Shapiro's life was threatened, as well as that of his family, credit for which was taken by local chapters of Betar and the Jewish Defense League. His parents were temporarily forced out of their home by threats.[3]

In 2004 Shapiro was part of a collective that released About Baghdad, the first documentary after the 2003 invasion of Iraq. It features the return to Baghdad of the poet Sinan Antoon. In a Democracy Now interview Shapiro said: "I think it's hard to compare although what we’re seeing today in Iraq, unfortunately, and really tragically, is very reminiscent and of the tactics of the occupying forces that we find among Israeli forces."[12][13]

In 2006 Shapiro, with Aisha Bain and Jen Marlowe, released Darfur Diaries. Filmmakers explored the history of the conflict in Darfur and interviewed refugees and displaced persons, particularly victimized women and children.[14] Shapiro explained his interest in a Democracy Now interview, saying: "[J]ust looking around and seeing what I had been doing in the Occupied Territories, the recent film I had done in Iraq, I realized that if nobody else was going to do it, then it's incumbent upon us as individuals to try to do whatever we could."[15]