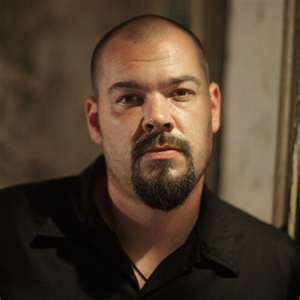 Aaron Goodwin (born April 1, 1976) is an equipment technician, camera operator and co-investigator of Ghost Adventures. In need of a cameraman for their documentary, Groff introduced Goodwin to Bagans to assist them with primary filming and B-roll taping of the series.

Before joining Bagans and Groff, Goodwin had worked as a camera operator for the Ultimate Fighting Championship (UFC) and several behind-the-scenes film premieres in Las Vegas.[16] Prior to his experiences in Virginia City, Nevada,[12] he "never really thought twice about ghosts." Goodwin looks perpetually terrified on the show and now considers himself "a hundred percent – no, a thousand percent – believer."[13] Goodwin is often left alone in the hotspots during lockdowns to act as bait for whatever may happen.[17][18]

At Preston Castle, the crew claimed that marks which appeared on Goodwin's left leg were similar to those that appeared on Bagans' back during the first Bobby Mackey nightclub investigation.

They set up an experiment at the Winchester Mystery House, where they hoped to communicate with demonic entities at Bobby Mackey's Music World and Washoe Club. To facilitate this, they used very low frequencies, coil antennae, and satellite communication. Due to his nausea and fatigue, combined with overall feelings of dread, Goodwin was the prime target of these demonic attacks. He was simultaneously mentioned in multiple EVPs (Electronic Voice Phenomenons) at Bobby Mackey's 2,400 miles away during their investigation. He was possessed in Bobby Mackey's.[citation needed]

Originally from Portland, Oregon, as of 2012 he resides in Las Vegas.