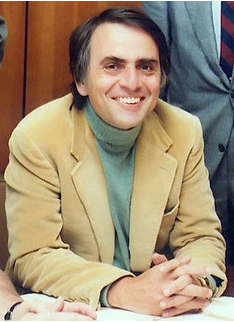 I just rewatched a wonderful clip of Carl Sagan explaining the 4th dimension. He does it by demonstrating on a table with using square pieces of paper to represent '2 dimensional beings', which he calls 'Flatlanders'. These 'Flatlanders' only perceive the world in 2 dimensions.

I just rewatched a wonderful clip of Carl Sagan explaining the 4th dimension. He does it by demonstrating on a table with using square pieces of paper to represent '2 dimensional beings', which he calls 'Flatlanders'.

These 'Flatlanders' only perceive the world in 2 dimensions. They can go forward and back, and side to side, but up and down do not exist to them.

Then he brings in an apple, representing a 4th dimensional being. The apple hovers over a little square piece of paper and says 'Hello'. The Flatlander has no way of recognizing the apple and instead feels the greeting coming from inside him!

At some point the apple tosses the piece of paper into the air, and the Flatlander has a multidimensional experience, seeing all his little paper friends below. When he returns to his Flatland world, he can't explain to them what happened, because they do not have an 'up' nor 'down'.

As I was watching this, I realize - that's very much what life on Earth is like for folks. They're in their little flat world, and all that exists is what's in front of them, where they're going, or what's behind them, where they've come from. Their only measure of reality or basis of comparison is the other little square pieces of paper on either side.

(I actually knew someone like this; he was a software programmer for Microsoft. I use to say he had the emotional depth of a piece of paper)!

Yes, we exist in this physical reality. And in this world we have time and space. We have the past, where we came from. We have the future where we're going. We have distance and how long it takes for us to get from here to there. We have our bodies and through our bodies we perceive the lighter molecules of oxygen and sunshine, and the denser molecules of the earth and water.  We have emotions and we have thought, and with both of these we make up stories to color our passage through this world.

And, we are more than just our bodies.  We are Apples.  We're above and beyond all of the limitations of time and space, density and effort.

When you're living life as a Flatlander, you may think an apple has come along and tossed you into the air, giving you a brief glimpse of life from an 'airplane's view'.  As a Flatlander you may worry about apples invading your 2 dimensional world and doing this to you.  As a Flatlander you may worry about the other square pieces of paper thinking you're crazy if you have an up-down experience.  Or worry they can stop you from having one!

As an apple, you're aware of being in all places at once.  There's a little slice of you in Flatland, which is fun and amusing.  And the greater part of you is above and beyond that.  You're not worried about the other Flatlanders.  And, truth be told, you're not worried about the other apples.  Because if you go up, up, and up, you realize there *are* no other apple's.  You're It.

You don't feel lonely as the only apple because You're so Big, You're Everything.  And if you go down, down, down, you can interact with the other aspects of yourself you've created.  The other personalities and square bits of paper.

The more aware of myself as an Apple, the less the pieces of paper get to me.  When I'm an Apple, I don't see the other pieces of papers are limitations to my reality.  They're just elements in my own wonderful creation.

So, this week, I invite you to remember you are an Apple.  Whenever things seem flat, remember you can't perceive beyond this dimension with your human eyes, because they're part of your physical body which only exists in this dimension. You perceive the greater worlds with your extra-perception. You sense them, you Know them.  Use this greater Knowingness to expand your experience.  Try this for a week and see what happens!