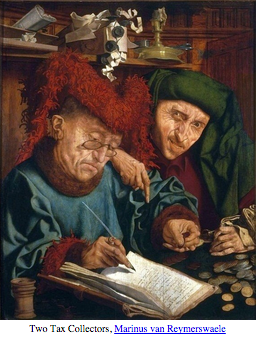 "In this world nothing can be said to be certain, except death and taxes." Benjamin Franklin

"In this world nothing can be said to be certain, except death and taxes."  Benjamin Franklin

This may be a little premature (for both topics), but I was having a conversation with Janet, my radio show co-host about recording a show in April. She thought it could be about money, as it is tax time in the U.S. 'People are feeling taxed' she said. 'What is taxing you, how are you feeling taxed?'

And I immediately thought, 'in paying taxes I am expressing appreciation for all that the taxes are going to support!'  I like roads, and school, and healthcare, and retirement. And I may not like supporting warfare, I don't mind supporting the troups. Military spending includes supporting military families.

We think of taxes as something bigger than ourselves (the Government) taking something away from us. Or we count on tax returns to give something to us. We're little, they're big.

And from the perspective of Consciousness, it's all a creation.  As the greater aspect of ourSelf, we create the reality of taxes.

If we feel like it's something happening to us, we're reacting as our body/personality.  We feel powerless, less capable, something bigger than us has control.

Stepping up to the awareness as Consciousness, we feel amused, we are in total agreement with whatever is occurring, we see the interconnectedness of it all.

As Consciousness we feel ownership, and authority.  Nothing is more powerful (and nothing is less).  There's no good nor bad as Consciousness, there's no ethics, so it's all good.  There is ultimate acceptance of what is.

"The only difference between death and taxes is that death doesn't get worse everytime Congress meets."  Will Rogers

As Consciousness we've created this wonderful world of opposites and oppositions.  It's not accurate to say this is all an illusion, because it invalidates the very real, feeling experience we're having.  It's too easy to try to detach by being in denial and trying not to feel.  But then we miss the point of being here.

Taxes aren't certain, you can live without taxes.  Death may be an inevitability for the body but it's timing isn't certain.  Perhaps the biggest illusion is death.

We react to death, we feel the absence of the deceased's physical presence, but it's our grief that keeps us from sensing the aspect of them that's still alive.

If we miss someone, we may actually be experiencing what Bryon Katie calls a visitation.  They come to mind because they're there.  It triggers our body, because it feels the absence.  Bodies don't like death because they're not going to make it out of this lifetime alive.  But we will.

Consciousness doesn't die.  And that is certain.