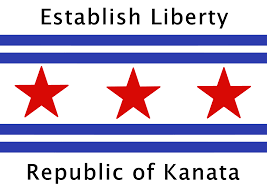 United Resistance Movement forms to oppose police state regime in Canada; Justin Trudeau and others to be charged with Treason and Criminal Conspiracy in Common Law Court Action

Learn the details this Sunday April 26 on Here We Stand: The Voice of the Republic of Kanata at 3 pm pacific and 6 pm eastern on bbsradio.com/herewestand

Canadians are faced today with the single greatest threat to their lives and liberties: not a flu virus, but a domestic police state. Under the guise of an exaggerated health emergency, an illegal regime of Rule by Decree has replaced the Rule of Law and democracy in Canada.

Exceeding his authority and powers, Prime Minister Justin Trudeau has outlawed free speech, assembly, movement and dissent across Canada by issuing unlawful decrees not authorized by Parliament or by a court of law. Canada is now operating under a state of indefinite martial law where people can be summarily arrested and imprisoned without due process.

This destruction of our most cherished and fundamental liberties can never be justified, especially on the grounds of a Corona flu virus which is not as lethal nor as prevalent as a normal seasonal flu. Trudeau’s arbitrary actions and the police state they are creating are part of a proven global corporate agenda to impose mandatory vaccinations and bio-metric micro-chipping on a controlled and enslaved world population. We must all say no to this monstrous, genocidal plan.

In response to the present tyranny, we the free people of Canada are today publicly charging Justin Trudeau and his accomplices with criminally conspiring to commit violence and treason against all Canadians. We declare Trudeau and others to be public enemies and threats to the safety and liberty of Canadians. We shall so charge and indict them in an upcoming Common Law Court of Justice that will seek to restrain and depose their dictatorship.

Accordingly, we call upon all Canadians to refuse to obey or cooperate with Trudeau’s private statutes. As decrees made outside the law and Parliament, these rulings have no authority or power over any of us, and we are not required to obey or give our consent to them.

We therefore call upon the civil servants, police, RCMP officers and soldiers of Canada to uphold our sacred liberties by refusing to enforce any of Trudeau’s decrees that deny us our rights and freedoms. We declare that any of these public servants and officers who assist tyrannical measures will be considered accessories to a crime against the people and thereby liable for prosecution in courts of law.

To coordinate this campaign of active civil disobedience and the recovery of liberty, we are calling today for the creation of a United Resistance across the country to encourage and organize Canadians to defend themselves, their children and their communities in the face of a dictatorship.

We propose that our Resistance unites around these three common goals: To end all forced quarantines, curfews, distancing and other restrictions that assault our liberty; to oppose all mandatory vaccinations; and to restore the rule of law and democracy.

We must all unite now, not only to resist the Trudeau Tyranny but to reclaim the nation for all its people by establishing a new Constitutional Republic that will safeguard our liberty. The present tyranny in Canada is the rotten fruit of a legacy of foreign colonial rule by decree and genocide that must be replaced by a free and equal society that is self-governed by and for all the people. The time for genuine independence and freedom has arrived.

For years now, we in the Republican movement have been actively creating this new society in many communities across Canada by building neighbourhood assemblies, local common law courts and Citizen defense groups under elected Sheriffs. These seeds of direct democracy have now become our first line of defense against arbitrary arrest and other repressive measures of the Trudeau Tyranny. We urge everyone to embrace citizenship in the new Republic and live within the freedom and protection of its sovereign national jurisdiction.

These are the times that try our souls. But we will not despair or walk in fear of one another. For we remember that we are not descended from timid or frightened people. Our ancestors and our allies seen and unseen, here and abroad, stand with us now and forever in this sacred battle for liberty. So take hope by taking a stand with us today. Join the United Resistance and fight back!

No cooperation with the police state!

Reclaim the Nation for We the People!

An end to tyranny now!

To contact the Republic write to republicofkanata@gmail.com and see its Vision and Proclamation in Establishing Liberty: The Case for the Republic of Kanata at https://www.amazon.com/dp/1721282033