Dear Meryl Streep: A Wake Up Call from the Land of Terminal Niceness 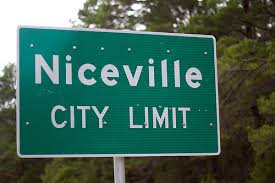 Dear Meryl Streep: A Wake Up Call from the Land of Terminal Niceness
Summary

Dear Meryl Streep: A Wake Up Call from the Land of Terminal Niceness

During your unabashedly courageous defense of civil liberties and the “submerged America” at the Golden Globe Awards the other night, you referred to actor Ryan Gosling in this manner: “Like all of the nice people, Ryan is a Canadian”.

Having had my life destroyed and blacklisted by a host of “nice” Canadians after I exposed their not so nice genocide of many tens of thousands of aboriginal children in their Christian labor camps called schools, I hope I'm not appearing too jaded or biased when I tell you that you are woefully misinformed about Canada and its people. But since most Americans can't even say how many provinces we have or where Toronto is located, your attitude isn't exactly unusual, even among Hollywood liberals who pride themselves on being politically erudite.

Canadians have honed a hypocritical smugness and an "aren't we so much better than those gun toting redneck Yankees" attitude to a fine art. We constantly cast our moral stones to the south while wading through and ignoring our own mounds of corpses. Our deliberate veneer of “niceness” that has historically concealed so many of our crimes is much like the arch-typical town child rapist who always has an impeccably beloved public image even as he ravages the innocent. If your average Canuck seems “nicer” to you than your own countrymen, Meryl, then I'm afraid you're confusing duplicity and moral cowardice with pleasantness.

Canadians are “nice” simply to avoid causing an upset or controversy to anyone: especially when they're authority figures, including murderers and criminals in high office. Along with our pleasant affect as a people comes a craven deference to power, a pathological fear of change, and the lowest conviction rate for child rapists anywhere in the western world. Indigenous people in our country have a not-so-nice standard of living about seventieth in the world, below Thailand and Brazil, plus a national death rate as high as it was a century ago.

In reality, Meryl, Canada is a closed and authoritarian society with none of the formal separations of power found in your country. Our elected politicians' oath of office isn't even made to our people or to a Constitution, but to an aging autocrat on a throne in London; and our head of state isn't elected but is the Queen's personal appointee, the Governor General, who can dismiss the government at any time. Rule by fiat and overt corruption is the name of the game up here. And so not accidentally, after World War Two Canada smuggled more Nazis into our country than any nation in the world, while restricting Jewish attendance at our universities to no more than 1% of the student body. And that nice little arrangement didn't change until long after male Indians finally got the vote here: some time around 1968.

So if indeed Canadians are imbued with “niceness”, then I'm afraid it's of the terminal variety.

Terminal Niceness is something I witnessed up close and personal as a United Church clergyman when I had the audacity to open my pulpit to the tortured aboriginal survivors of Christian Canada's homegrown gulags. Being a properly groomed Canadian I kept smiling to my congregation in our terminally nice co-dependency right until the moment I was nicely terminated. And then I became the kind of not very enjoyable social outcast that no self-respecting Canadian likes to be associated with. The blood soaked Canadian history I've revealed is well, not very nice. So my fellow Canadians just ignore it all and consider me as simply rude.

I envy you Americans. You tend to say what you mean and mean what you say, regardless of your politics. We're much too British for that. You see yourselves as citizens first, not as "subjects" like us, and everybody in Yankee Land is always squawking about their unalienable liberties. Now that's extremely un-Canadian of you to do so. For up here what matters above all else is politeness, order, and not offending anyone. I mean, Jesus! We even apologize when we're the ones being bumped into!

In short, dear Meryl, we Canadians have elevated blandness into a national icon to which we pay daily homage, sacrificing at that altar any semblance of truth, justice and accountability. Maybe that impudent countryman of yours, Billy Bob Thornton, put it best: “Canada is like mashed potatoes without the gravy”. Personally I prefer a richer diet. But then again, I am half American.

Anyway, Meryl, congrats about your award, and your fine tearful performance the other night. Although the grass may seem greener over on our side of the invisible line, please do cherish the simple fact that, unlike Canadians, you guys have a heritage of something more than passive conformity to whatever latest gangster is in the saddle.

Canada? Shit, I can carve a better nation out of a banana.

p.s. You may now want to read my latest tomes, available at Amazon, especially Murder by Decree: The Crime of Genocide in Canada and 1497 and so on: A History of White People in Canada. (see the links below). Or tune in to our irreverently subversive blog show Radio Free Kanata every Sunday. Ciao baby. 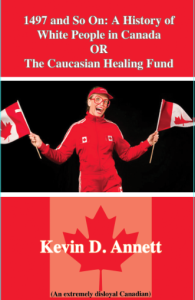 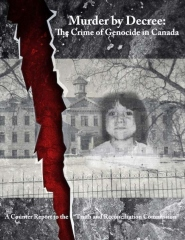 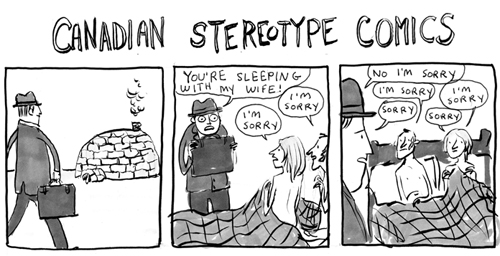