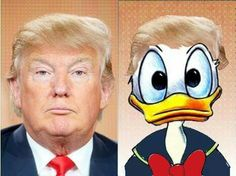 A Modest Proposal for Dealing with Donald Trump: Eat the President
Summary

A Modest Proposal for Dealing with Donald Trump: Eat the President

In these latter days of planetary hysteria, everyone seems to be the enemy and the real villains keep getting away with their shit cloaked behind a three second sound bite. It’s enough to make you want to puke all over everything, you know?

These are indeed the times that try not only our souls, but our imagination. Someone says “a Fat Cat President Elect”, and all we can think of doing is grabbing a protest sign or a blog spot and calling the creep names. And so it was with some awe and elation that I was struck nearly blind this morning by my own brilliance, as the answer finally came to me.

We have to eat the President.

Cannibalism is a very American thing to do, after all. Hell, we chewed up many millions of brown folks to make our country Safe For Democracy. Assimilating the enemy is old hat, and the prescribed method of all True Patriots. It’s also the moral thing to do, as well. We eat our enemies for their own good. Ask any missionary or corporate accountant.

Nor do I think that the logistics pose a problem. Chubby billionaires like Donny Boy have been on the menu of various corporate and political factions for centuries. It's what the ruling elites do: they consume each other, and they drop like flies depending on who’s screwing who. For all his filthy lucre, Mr. Trump is no exception. The guy’s got so many enemies in Washington that he doesn’t even want to live there.

No, it should be an easy enough thing to slice and dice that Wall Street ham, and serve him up as a spicy ragout or filleted casserole. Hillary and half the Republicans in town would be only too happy to supply the carving knives.

Consider as well the immense moral capital that the dissection and gulping down of Donny Trump will confer on his late memory, and on his syndicate. His final, Christ like consummation: letting his body and blood be consumed by the faithful! What an unbeatable publicity gimmick for a stumbling Trump International Incorporated, and a sure fire way to cement his place in American history!

Cast your vision even further afield and imagine the commercial possibilities of a globally televised “My Dinner with Donny” event. Holy Smorgasbord! The thing would do better at the box office than Texas Chainsaw Massacre! And think of all the merchandising spin-offs, so dear to the guy's grasping little heart: Blue Ray DVD’s of the President-Elect's Last Moments on Earth, comic books, T shirts declaring “I Ate the Chief Executive”, and even miniature Donny candy-dolls, with detachable and edible limbs oozing red jello. A perfect Christmas gift!

Now, considering that President to Be Donny is soon to take office here in the Land of the Fee and the Home of the Depraved, this whole Chow Down on the Presidential Crown Plan should work out wonderfully. After all, who’s more likely to cash in on a profitable business venture than your average Congressman and Senator? And come on: it’s not as if the Washington Mob haven’t eaten people before!

Trust me people, the thing will work. Even the soggy mess remaining afterwards will present no problem to the Federal Cleanup Crew, who have been dumping human remains for a hell of a long time.

So there you have it: a morally, politically and commercially winning plan. Eat the President, for your own good, and for his. And as someone so impressed with himself and his perceived moral stature, Mr. Trump should be all in favor of his own devouring for the good of America. After all, as Monica Lewinsky demonstrated, doesn’t your average President want to be eaten?

But after all is said and done, if CEO Trump is averse to the idea of dying for the sake of so many; well, it just goes to show that you can’t trust an actor.

"Oh, I could just eat him right up!" - an elderly female Donald Trump supporter, Baltimore, September 2, 2016