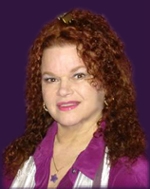 Troika (pronounced Troy-ka) Saint Germain is an Accelerator and Mystical Alchemist who is able to advance people to their next level of spiritual development through her own frequency and powerful Activations received from the Higher Realms. She was born "awake" and is able to consciously visit the Higher Realms and communicate with Angels & Ascended Masters since childhood. She has a unique relationship with Ascended Master Saint Germain who has personally taught her about Ascension and other spiritual knowledge, as well as, physically manifested to her many times throughout her life.

In January 2003, he asked her if she would create alchemical and high vibrational products of his design to assist humanity with transformation and ascension. She gladly accepted and Saint Germain Cosmetics was formed. Later that year, Saint Germain revealed the formula of his famous "Elixir of Life", asking Troika to produce it as a Vibrational Essence. More products continue to be developed. All may be seen and purchased on this website.

"One of these Days", Troika plans on writing a book about her experiences with Saint Germain and the secrets and techniques he has taught her, however, much is shared during the Ascension PlayShops. She is the Founder and President of Saint Germain Cosmetics, creator of the popular websites 1Spirit.com and AngelShop.com, owner of Wonderland Design Company, a Teacher and Reverend of Metaphysics, Mystical Alchemist, Axiatonal Attunement Therapist, and a Professor of Buddhism.

Troika is available worldwide for workshops and for private Ascension & Personal Guidance Sessions with Saint Germain by telephone.

Born in "The City of The Angels", Troika moved to Mount Shasta in 1992 and lives in a magical Geodesic dome with her four "Angels in Dog Suits" canine companions.

Troika is a multi-talented artist and designer having worked professionally as a Graphic Designer, Interior Designer, Web Designer, Set Designer for stage productions in the United States and Japan, Art Director of several national magazines and major newspapers, and designer of seven trophy-winning parade floats for the Pasadena Tournament of Roses. Additional professions include; Cosmetologist and Make-Up Artist, Florist, Actress, Radio Personality, Business Owner, and Publisher of The Light Pages, a New Age Telephone Directory; and Spirit Voice, a popular on-line newsletter. She has been a published author since age 13, and a Playwright of two long-running Hollywood stage productions.