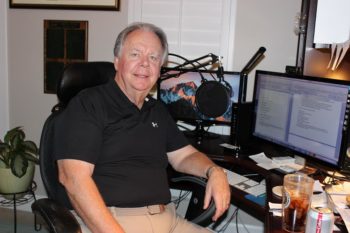 Dan started his first radio career on WCOL-AM in Columbus, Ohio in 1970 doing talk radio when just a few people in the nation were experimenting with this new programming format.  His program, “The Place,” won the American Legion award for the best youth programming in the State of Ohio.  As a political activist he was in charge of media relations during the school desegregation case against the Columbus Public Schools.

He started a new career in the mid-1970s in the financial services industry working as a broker for Merrill Lynch in Columbus, Ohio.  In 1979 he moved to New York to run a product area for Merrill Lynch.

In 1989 he left Wall Street to start his own product development and marketing firm and continued managing money.  His second career in media began in 2012 when he began writing fiction.  He wrote 7 books; 4 thrillers, and 3 children’s books.  The first thriller, The Brotherhood of the Red Nile, is 4.5-star rated by Amazon.  Perkins appeared on radio and TV to promote his books.  Following that, he was called back as an expert on energy, capital markets, and terrorism.  Today, Dan appears on more than 1,400 radio stations a month and he has written about current events in commentaries for more than 20 different news blogs.

His foundation, Songs and Stories for Soldiers, seeks to help veterans in the areas of Traumatic Brain Injury, Post Traumatic Stress Disorder, Sleep Deprivation, and Suicide Prevention.  His foundation helped 130 Veterans Services facilities across the nation by delivering more than 19,000 MP3 systems free to veterans.  As the founder of Songs and Stories for Soldiers Dan has been asked to be a participant on the Presidential Task Force P.R.E.V.E.N.T.S. to tackle the problem of veteran’s suicide.

Perkins is a co-founder and host of the W420radionetwork.com show called Americas Cannabis Conversation.

More information about Dan Perkins and his work can be found at danperkins.guru .