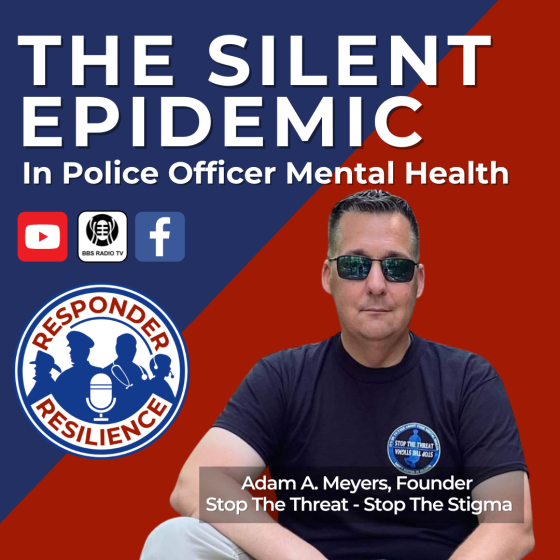 In April 2016, LEO Adam A. Meyers was involved in a critical incident when he used deadly force against someone who armed themselves with a hatchet inside a busy Department store.

In the aftermath of this incident, Meyers was plagued with trauma and guilt, descending into a spiral of depression and using alcohol, while isolating and withdrawing. This led Adam to create Stop the Threat – Stop the Stigma, a mission devoted to removing the stigmas around speaking openly about mental health within law enforcement.

Adam’s overall goal for establishing Stop The Threat - Stop The Stigma and speaking about his critical incident is to promote Law Enforcement Wellness and inspire other Law Enforcement Professionals, and those who work in the law enforcement profession, to speak about their own mental health.

The issue of mental health in law enforcement is prominent everywhere and it is an issue that commands a new perspective. Without advocacy and awareness, we will continue to wait until the crisis stage to address mental health for Police Officers and by then it may be too late.

Adam A. Meyers was a Police Officer and Detective in Wisconsin for 21 years. Adam began his Law Enforcement career in 2001 and was a five year active duty United States Army Military Policeman prior to 2001.

Adam is a Mental Health Advocate and takes every opportunity to speak about his personal and professional challenges with mental health after his 2016 on-duty deadly shooting. Adam is currently employed as an Emergency Mental Health Crisis Worker in Wisconsin.