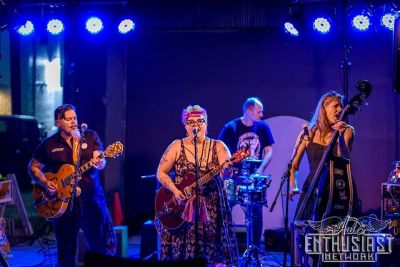 Jane Rose and The Deadend Boys are an Alt-Country, Rockabilly, Blues band hailing from Nashville, TN. Fronted by the powerhouse vocals of Jane Rose, and backed by the rhythmic stylings of some of Nashville's finest musicians, you'll hear them coming from a state away!  The band was founded in 2010 stemming from Jane’s life-long love affair with the culture and styles of these genres.

They tour the country extensively and are featured at many hot-rod/car shows year round. Make sure to take notice, this band is a force to be reckoned with!

Jane Rose (vocals/guitar/songwriter)
Jane Rose grew up fast and mean and, at age 13, she committed her first heinous act of cold bloodedness… 3 men lost their souls, consumed by Jane’s powerfully sultry and soulful voice.  Jane got caught up in the heat of the moment while overtaking her fourth victim, and was sent to lock down in the Muhlenberg Penitentiary. Jane found redemption playing violin in the penitentiary church band, and harnessed the power of her soul and heartache-filled past into her music and song-writing. This purge led to the creation of such songs as How Could You and Death Becomes Him (available on the CD Poultricide).

Upon her release from Muhlenberg, she formed The Jane Rose Band, belting out over 50 original songs during their five-year run in the Louisville, KY area. But once again, Jane’s voice landed her behind bars. During her short incarceration, she scoured the land of craigslist, posting ads in search of musicians as crazy as she, who wanted to live out of a van and travel to every po-dunk town across all corners of the world. Jane just couldn't resist the calling of the slappin’ upright bass and the quick-cut time beat of the drums - and that Gretsch hollow body she had been drooling over since age 13. She assembled a group of deadend boys that perfectly fit the bill. The day she was released, The Deadend Boys snatched her up in the murder van and they’ve been on the road ever since.