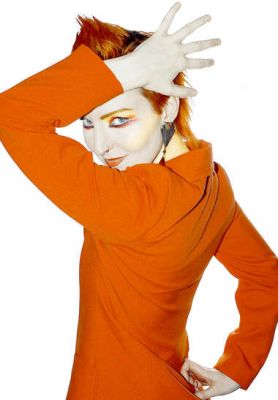 UK based electronic songwriter.  Micci programs, arranges, engineers, produces and masters the She's Got Claws albums and other releases at Chameleon Studios (UK).
Micci loves to create fractured beats and synth hooks. These inspire her to add her poignant lyrics and dulcet tones to the tracks.

Her latest album release, ​Doppelgänger, has overdriven bass, courtesy of Chris O-Ten from her previous band. In addition to this, Andy McCluskey (OMD) jumped on board to produce two songs on this album, with his nephew, Cameron McCluskey, creating a remix as the bonus track.

​Influentially she draws her inspirations from her broad spectrum of musical taste.  From the beautiful songs and soundscapes created by the French band AIR to the edgy electronic punk attitude of The Prodigy, NIN, Chemical Brothers and Gary Numan.
Micci also loves rock and indie artists who love to experiment with electronics within their sound, such as Muse, The Wombats and David Bowie.

​She believes that having an open mind towards many styles, will inspire you to create new genres and add to the progress of music.