An attack on the best of us is aimed at our hearts!

One of the world’s most outstanding and courageous men is facing arrest and confinement in Canada.

Reverend Kevin Annett, a sterling fighter for human rights and famed whistleblower, was issued a fraudulent COVID isolation order on March 30 and may be arrested at any time on false grounds. Kevin’s laptop, cell phone and bank account have all been disabled, and private operatives of the Canadian government are actively hunting him.

In response to this state terror operating under the camouflage of the corona virus, an international campaign is building to defend Kevin Annett. Kevin is in the process of being named by international agencies as an official Victim of Conscience and, if arrested, as a Political Prisoner in Canada.

Kevin Annett has been targeted by the Canadian state and its churches for over a quarter century because of his historic role in exposing their genocide of aboriginal children. He has also successfully prosecuted the Vatican and the British Crown for Crimes against Humanity, forced the resignation of the criminal Pope Benedict, sparked the recent global movement to end child torture and trafficking, and established the basis for a Republic in Canada. Kevin has many powerful enemies, but he has continued undaunted to stand by their victims and the truth.

Over the past month, those enemies have tried to crush Kevin because his work is exposing high level criminality in Canada involving treason by the Trudeau government in league with China.

On the eve of their investigation by a Citizens’ Grand Jury led by Kevin, the very politicians named in the Jury’s indictment issued a false COVID Isolation Order against Kevin that contradicted their own records, correspondence, and procedures. These men knew that Kevin could not by law or his own ethics cooperate with such a blatantly fraudulent order and could then be arrested for not complying with COVID regulations.

This contrived scenario is now playing itself out. The Grand Jury has been halted and Kevin Annett is being actively hunted by the secret security forces employed by the head of Covid Canada, federal Public Safety Minister Bill Blair, one of those named in the Grand Jury indictment.

This attack on Kevin Annett is a Criminal Conspiracy by Canada to silence a dangerous political opponent using the convenient weapon of covid regulations twisted for partisan ends.

An international and domestic campaign is pressuring the Trudeau government to cease and desist from these cruel attacks on Kevin Annett. Here is what you can do to help him:

1.    Post this notice and its attachments and links throughout your social media networks and contacts.

2.    Write a protest letter in defense of Kevin to Prime Minister Trudeau (pm@pm.gc.ca), Governor-General Richard Wagner (info@gg.ca) and Public Safety Minister Bill Blair (Bill.Blair@parl.gc.ca) . Send copies to the media and your networks. Here is a sample of what you can write:

“Dear (name), Your government is conducting a campaign of criminal harassment and political persecution against one of your most effective critics, Reverend Kevin Annett, who uses the legal name Ciaran Buchanan. He has been issued a fraudulent COVID Isolation Order and threatened with arrest without cause or justification. We demand that your government and its COVID agencies immediately cease and desist from any further attacks on Kevin/Ciaran. You will be held personally and legally liable for any harm that befalls him. We are raising this matter with the world community, political leaders, lawyers, and the media. Sincerely, (your name and date)”.

3.    Stage public protests and information pickets opposing Kevin’s persecution outside Canadian embassies and consulates, if you are outside Canada, and at courthouses and the offices of Members of Parliament, government officials, the RCMP, and COVID agencies in Canada. Film everything you do and post your actions on social media with links to our sites.

4.    Donate funds and other help to Kevin’s legal defense and wider work by writing to republicnationalcouncil@protonmail.com or itccsoffice@protonmail.com .

5.    Do background reading into Kevin Annett and his decades long struggle to abolish genocide, child murder and tyranny at www.murderbydecree.com and republicofkanata.ca , and listen to his weekly blog show on bbsradio.com/herewestand every Sunday at 3 pm pacific, 6 pm eastern, 11 pm GMT.

6.    Get involved in the movement to fight the COVID police state by joining or forming Republic common law Assemblies wherever you are! To learn how, and to receive material, write to republicnationalcouncil@protonmail.com .

The National Council of the Republic of Kanata is the coordinating center of our movement until a permanent Constitutional authority is established at our first convention in April, 2021.
For citizenship applications and general information see republicofkanata.ca . The vision, proclamations and program of the Republic can be found in our book "Establishing Liberty: The Case for Kanata" (https://www.amazon.com/dp/1721282033) The weekly radio program of the Voice of the Republic can be heard every Sunday at 3 pm pacific, 6 pm eastern time at bbsradio.com/herewestand . 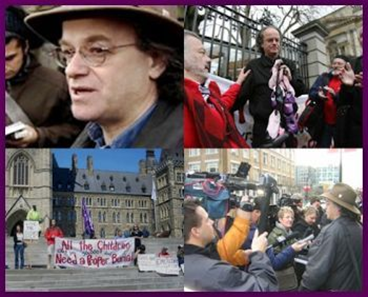