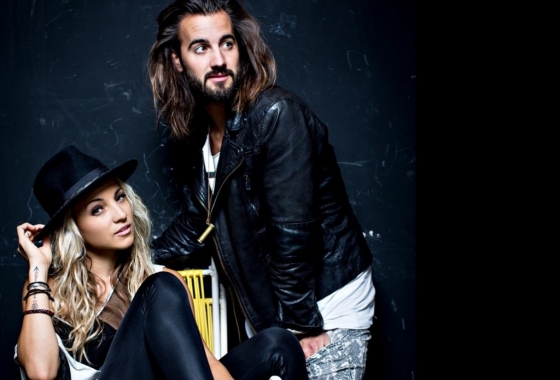 The Zibbz are a sister / brother duo from the Swiss side of the Alps. Their music is electronically infused blues rock with a massive live backbeat and quirky synth-driven production by Stee Zibb. Front woman Coco Zibb can wail with the best of them. Her voice is a mix of Pink and Janis Joplin, providing the perfect mix of pop and raw emotional growl that makes for hit records.

Their love for music developed at an early age, growing up in a household of musicians, watching mom and dad play in rock n’ roll bands.

`I remember Stee used to mess up mom’s drum kits by adding pots and pans or whatever else he could find to put together his dream-kit,` says Coco.

Stee adds, `in the early days when Coco was living and performing in London, I’d call her after school to write songs over the phone; thats how The Zibbz got started!`

The Zibbz set off a buzz in Europe in 2010, starring in their own reality show on Swiss Music-TV, Joiz‘ (5 seasons) and playing the festival circuit. Their debut album “Ready?Go!” hit the national charts at number 14 and they return to Europe every year to play festivals.

Since moving to L.A. The Zibbz have rocked at famous venues all over town including the Viper Room, The Roxy Theatre, No Name and the Sayers Club. Opening at the El Rey for Juliette & the Licks in July 2015 was a recent highlight and garnered rave reviews from local press. Since teaming up with Cisco Adler & The Cell Management, they have crafted a brand new EP and plan to release several music videos in the coming months.

The Zibbz’s music strives to break down walls and lift the masses up beyond old notions of genre, gender, and race. Their combination of style and craft is a perfect shock to an industry in need of a swift kick in the ass.