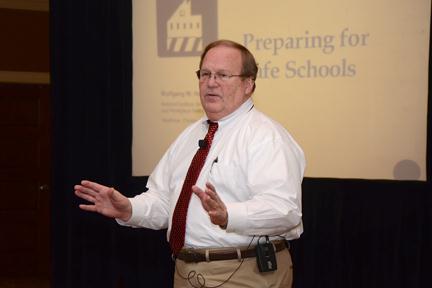 Wolfgang is also the author of a book for educators and school bus drivers on aggressive behavior management and the use of reasonable force, as well as numerous magazine articles. His article on “Breaking the Code of Silence” was published in the March 2000 edition of the American School Board Journal. He has been a featured guest on many national news programs including Dateline NBC, Good Morning America, and MSNBC.

Wolfgang was the Director of Safety and Security for a large public school system in Florida and brings to the company a national reputation in school safety, education and law enforcement. He has experience with U.S. Customs and as a Florida State Trooper. After leaving law enforcement, he went into education as a teacher, administrative leader, and finally Director of Safety and Security. His 35 years of work experience is a major asset to any involvement with safety and security.

After only filing Connecticut Freedom Of Information requests about the alleged Sandy Hook ‘massacre’, School Safety expert Wolfgang W. Halbig was visited by homicide detectives warning him that if he keeps making inquiries he would suffer the legal consequences.

Halbig also discovered that the report on the Sandy Hook event was the first school shooting in US history to be sealed as ‘Classified’, held by the FBI.

Halbig believes the Sandy Hook school shooting was a giant, elaborate hoax and no one really died.

For Halbig, there are unanswered questions, lots of them.

For instance, why in the immediate aftermath of the shooting were no medical helicopters summoned?

“Think about it: you have 20 children, 6 staff members who were supposed to have been shot. They’re seriously injured. Where’s the trauma helicopters? Those are the quickest and the best medical services that any child or any school staff member can receive, and no trauma helicopters were ever requested?”

Halbig also called Life Star emergency services, who confirmed they were never summoned that morning. “[T]hey said, ‘Mr. Halbig we were never requested on that morning. We were shocked and surprised, we were ready, we thought we were going to go to Sandy Hook.’ They had helicopters ready to go, but they were never asked.. Here’s my premise.. there wasn’t anybody there to be treated.”

Halbig also questions why EMT and firefighters, who were mere minutes away from the scene, were prevented from entering the school and possibly saving lives, and additionally, he wants to know how, within the first 11 minutes, America was already presented with a death toll.

“Who declared all those 26 people dead within the first 11 minutes? Connecticut law states that only a doctor can declare them dead, legally dead.”

Moreover, Halbig says the FBI’s classification of the school shooting report is something he’s never witnessed in his entire career. “I can tell you [out of] all the shootings, never has an FBI agency ever classified an investigative report on a school shooting.”

There are also a whole host of peculiarities Halbig is still baffled by.

For example, why was Sandy Hook elementary torn down? Even in the Columbine tragedy, whose crime scene Halbig assisted with and in which he testified as a key witness, the school was cleaned up, but was never torn down.

According to Halbig, no one could tell him which environmental company cleaned up the bloody mess, or who installed the school’s security system, all things his job would require him to know.

He has other pressing questions, such as:

Why was there a registered nurse found in the building four hours after the shooting?

Why were there port-a-potties on site within three hours?

Why were children turned around by officers and sent back into rooms supposedly littered with dead bodies?

How did someone with Asperger’s have the physical coordination to carry the large amount of munitions Adam Lanza supposedly carried?

Why did no parents file a lawsuit against the school, when in every other school shooting suits have been filed?

And ultimately, why would the state threaten Halbig?