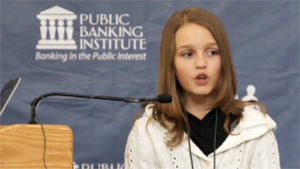 Victoria Grant, born in 2000 and living in Cambridge, Ontario, Canada, is a young Canadian who in 2012 has become an internet celebrity after her bank critical speech was posted on YouTube by her father, Zane Grant. The speech was held at a conference organized by the Public Banking Institute in Philadelphia. That video, which during the first week was seen by 65,000 people and up to the beginning of september 2012 has been viewed about 700,000 times (in its English version), has also been translations into several languages, such as Spanish, German and Italian. The newspapers which has described the girl and her speech include the Huffington Post and Forbes. She has also been interviewed on RT (Russia Today), the second most watched foreign news channel in the United States after the BBC News, and there described as a "child economist". The debate and media coverage of the speeches have partly focused on the fact that Victoria Grant is so young and it has been questioned whether she really wrote the numbers yourself. But the articles has also, to some extent, been about substance, that is, the banking system. Among the more established monetary reformists who have praised her include Bill Still and Ellen Brown.
Her speech