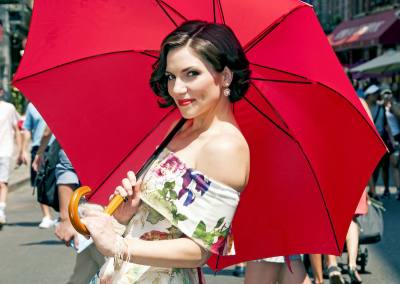 Growing up with her Barese (Southern Italian) grandfather in New York, Vanessa learned Italian American classics at an early age.

She developed as a singer in musical theater, discovered her love for jazz in her early 20’s and started performing with a trio. After her grandfather passed away, Vanessa was inspired to reinvent the Italian American classics that he taught her with modern jazz arrangements. Her mission; to keep the music alive for future generations, and in turn, her grandfather’s memory. She teamed up with Gianni Valenti of Birdland Jazz Club, NYC, producer, David Finck, and Manhattan Transfer arranger, Yaron Gershovsky, to realize her vision.

The result was a sold-out album release show at Birdland in June, 2017 and a unique album entitled, Italiana Fresca, that reached #65 on the jazz charts. Since then, she has performed at over 70 Italian festivals, events and jazz clubs across the country and has been played on over 20 Italian radio stations across the US and Italy.

For her next project, she was inspired to pay homage to Italian American influence on jazz music after a performance in New Orleans and from learning of her relation to the late jazz guitarist, Tony Mottola. She debuted a new show, Jazzy Italian, on October 13th, 2019, at Birdland, to another sold out audience, to celebrate Italian American heritage month. She is scheduled to record this show and release as a new album in 2021.

“She has taken songs treasured for generations and completely redefined them” – Jane Monheit, Jazz Sensation

“Vanessa Racci is one of the most talented performers I have ever met. Her shows are first class and her reinvention and choice of songs are unique.” – Angelo Venuto, Italian Pop Sensation

“A gracious presence on the stage and beautifully dressed as for a 1950s cocktail party, Vanessa Racci traced the contributions of Italian-Americans to jazz, a much more extensive history than a casual observer might think. She brings along a lovely voice, a fine sense of rhythm, a gracefulness evidenced in her dancing across the stage and a genuine appreciation of the music and her musicians.”  – Bart Greenburg for Cabaret Scenes Magazine, NYC