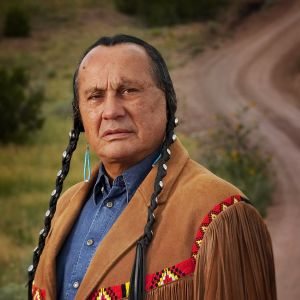 Russell Means has lived a life like few others in this century - revered for his selfless accomplishments and remarkable bravery. He was born into a society and guided by way of life that gently denies the self in order to promote the survival and betterment of family and community. His culture is driven by tradition, which at once links the past to the present.

The L.A. Times has called him the most famous American Indian since Sitting Bull and Crazy Horse. His indomitable sense of pride and leadership has become embedded in our national character. Today, his path has brought him to Hollywood, thus enabling him to use different means to communicate his vital truths. Through the power of media, his vision is to create peaceful and positive images celebrating the magic and mystery of his American Indian heritage. In contemplating the fundamental issues about the world in which we live, he is committed to educating all people about our most crucial battle - the preservation of the earth.

Thirty years ago, reflecting the consciousness of the sixties, he captured national attention when he led the 71-day armed takeover on the sacred grounds of Wounded Knee, a tiny hamlet in the heart of South Dakota's Pine Ridge Reservation. Means joined The Longest Walk in 1978 to protest a new tide of anti-Indian legislation including the forced sterilization of Indian women. Following the walk, the U.S. House of Representatives passed a resolution saying that national policy was to protect the rights of Indians, to believe, express and exercise their traditional religions, including but not limited to access to sites, use and possession of sacred objects, and the freedom to worship through ceremonials and traditional rites.

Today, with the same passionate determination, he has directed his energy towards the entertainment industry. In a record period of time, this famed political activist and early leader of the American Indian Movement (AIM) has become immersed in all five corners of the business, with projects including:  Lead roles in major feature films, (The Last of the Mohicans, Oliver Stone's Natural Born Killers, as a chief in John Candy's comedy Wagons East and as the ghost of Jim Thorpe in Wind Runner); Disney's third highest ever selling video (Pocahantas) in which he was the voice of Pocahontas' father, a television documentary for HBO (Paha Sapa), (Indian Father and Son) a pilot he created; Two albums of protest music with lyrics he wrote (Electric Warrior and The Radical). On the technological side, he stars in a CD-ROM (Under A Killing Moon). The website features information regarding the A.I.M. club, his recordings via the American Indian Music Company, his art, book, current events, biography and upcoming appearances and direct e-mail to Russell. Born on South Dakota's Pine Ridge Reservation in 1939, Russell Means is the eldest son of Hank Means, an Oglala Sioux, and Theodora (Feather) Means, a full-blooded Yankton Sioux. Shortly after the outbreak of WWII, his family moved to California, where he graduated from San Leandro High in 1958 and continued his formal education at Oakland City College and Arizona State.

Russell's commitment to uplift the plight of his people escalated when he served as director of Cleveland's American Indian Center. It was there he met Dennis Banks, co-founder of the American Indian Movement, and embarked upon a relationship that would rocket them both into national prominence. During this period, Russell staged numerous events designed to bring dignity to the American Indian. His most famous act of defiance, however, occurred at Wounded Knee on February 27, 1973. Responding to the numerous murders perpetrated by puppet tribal governments and the extreme conditions of oppression, the takeover at Wounded Knee revisited the sight of the American Indian massacre at the hands of U.S. soldiers in 1890. Ever vigilant for his cause, Russell has been lauded by the international community for his tireless efforts.

Russell splits his time between San Jose, NM, his ranch on the Pine Ridge Sioux Indian reservation, Porcupine, SD and his office in Santa Monica, CA. He takes pride in having instituted programs for the betterment of his people: notable, the Porcupine Health Clinic (the only non government funded clinic in Indian Country) and KILI radio, the first Indian owned radio station. Today, one of his principle goals is the establishment of a Total Immersion School, which is based on a concept created by the Maori people of New Zealand, where children are immersed in the language, culture, science, music and storytelling of their own people. Russell will adapt this total immersion concept to the Indian way of life and philosophy which is taught from a perspective that will nurture a new generation of proud children educated in the context of their own heritage.

Russell Means has devoted his life to eliminating racism of any kind, and in so doing he leaves a historical imprint as the most revolutionary Indian leader of the late twentieth century. An inspirational visionary, Russell Means remains one of the most magnetic voices in America today. Whether leading a protest, fighting for constitutional rights, starring in a motion picture, or performing his rap-ajo music, the message he delvers is consistent with the philosophy he lives by, which states:

The Universe which controls all life, has a female and male balance that is prevalent throughout our Sacred Grandmother, the Earth.

This balance has to be acknowledged and become the determining factor in all of one's decisions, be they spiritual, social, healthful, educational or economical.

Once the balance has become an integral part of one's life, all planning, research, direct action and follow-up becomes a matter of course. The goals that were targeted become a reality on a consistent basis. Good things happen to good People; remember time is on your side.