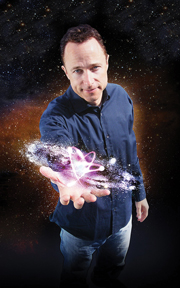 Roger Nygard was born in Minneapolis, Minnesota, and grew up along the shores of Lake Minnetonka. His father, Roger Nygard, Sr., was an executive at General Mills in charge of buying the trainloads of grain used to make Wheaties and Cheerios. Nygard graduated from Orono High School, and received a Bachelor of Arts in Speech-Communications from the University of Minnesota in 1984.

Nygard has extensive credits in film and television as a director, writer, producer and editor. He made his foray into the movie world in 1991 when he directed the low budget indie, High Strung, starring comedian/actor Steve Oedekerk, Fred Willard, Denise Crosby, and a very young Kirsten Dunst. The tagline reads: “The story of a guy with a few too many hang ups.” The movie has achieved cult status.

Lots of television and film directing and editing credits followed like Back to Back, which may be best known for having blown Bobcat Goldthwait to bits. It was during this time he that he was developing a reputation for working on quirky and unique projects. He realized he could combine what intrigued him with his “day job” and so Nygard the documentarian emerged as part of the overall package.

Trekkies was the first project to allow Nygard to explore his interest in human nature; people dressing up as fictional characters and extraterrestrials fascinated him. His partner in the project, Denise Crosby, first pitched Nygard the idea. He said, “I couldn’t believe nobody had done it yet, it seemed so obvious.” Trekkies has been described as “affectionate, nonjudgmental” (Hollywood Reporter & Daily Variety), or “terrifying, unsettling” (National Post), depending on who you ask.

While tackling feature interests like Trekkies 2, and sometimes lending support to a colleague’s project as an editor or producer, Nygard has directed or edited for an array of television series like: The Mind of the Married Man, The Bernie Mac Show, The Office,  The League, Curb Your Enthusiasm, Zoey 101, Zeke and Luther, etc., as well as directing commercials for such companies as Kia, Boost Mobile, DisneyXD, CBS, TBS, and others. For Nygard it comes down to whether a project is intriguing, funny, or challenging. In the case of his latest film, The Nature of Existence it’s all the above.