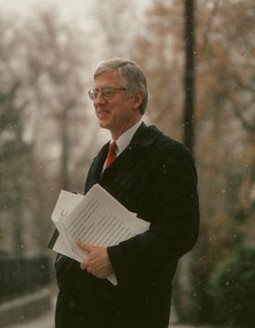 Rocky has always been committed to the principle that justice - social justice, environmental justice, and economic justice - must be an essential aim of public policy. His heartfelt commitment to social justice is reflected in many of the numerous articles and columns he has authored for local publications. For instance, he has written articles for magazines on such diverse topics as ethics in politics, combating racism, and criminal justice reform. He also wrote a weekly column for The Enterprise, a Utah business newspaper, covering issues such as tax reform, valuing diversity, and the importance of character in public life.

Having been the only major city mayor who advocated the impeachment of President George W. Bush because of his disregard of intelligence data indicating that Osama bin Laden was about to attack the U.S. and his dishonesty to the American people in the lead-up to the invasion and occupation of Iraq, Rocky has proven himself to be "non-partisan," forcefully demonstrating that the rule of law has been severely undermined by both major parties and by both Presidents Bush and Obama. Anderson has persuasively argued that despite his earlier belief that the Bush Administration would be merely an "aberration" in the history of the US, "President Obama has institutionalized some of the worst abuses of the Bush Administration" and has gone even further in establishing an imperial presidency that has fostered a two-tiered system of justice in the United States.

On August 11, 2011, Rocky denounced the Democratic Party and resigned his affiliation with it. He wrote in a letter to the Democratic Congressional Campaign Committee that "The Constitution has been eviscerated while Democrats have stood by with nary a whimper. It is a gutless, unprincipled party, bought and paid for by the same interests that buy and pay for the Republican Party."

On January 13, 2012, Anderson accepted the presidential nomination of the Justice Party, a new national political party. The Party's primary principles are integrity, justice, and liberty for all.

The emphasis of Rocky's campaign is the promotion of the public interest through the defeat of the systemic corruption that has caused massive failures in public policy. Rocky advocates an immediate end to the on-going wars; essential health care coverage for all citizens; urgent international leadership by the U.S. to prevent against the most catastrophic consequences of climate disruption; adequate revenues to balance the budget through fair taxation; treatment of substance abuse as a public health, rather than criminal justice, issue; control of the Federal Reserve by the Treasury Department and Congress; a balanced budget (or a surplus) except in times of war or major recession; an end to the legal concept of corporate "personhood;" a constitutional amendment to overrule Citizens United and to allow limits or prohibitions on the corrosive impact of money in our electoral system; and an end to the stranglehold on our government by the military-industrial complex.