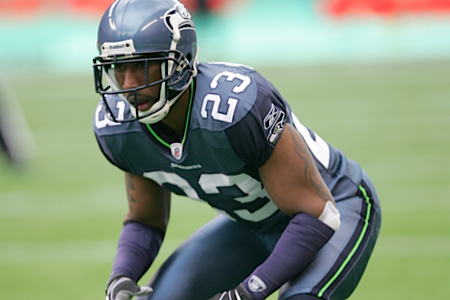 Marcus Lavon Trufant[1] (born December 25, 1980) is a retired American football player who was a cornerback in the National Football League (NFL) for ten seasons. He played college football for Washington State University, and was chosen by the Seattle Seahawks 11th overall in the 2003 NFL Draft.

Trufant was selected by the Seattle Seahawks with the 11th overall pick in the 2003 NFL Draft. Coming from Tacoma and graduating from Washington State University, Trufant is considered a hometown favorite. In 2007 Trufant played a big part in the Seahawks defense, intercepting a career high 7 passes and returning one for an 84 yard touchdown. He also deflected 15 passes and made 85 tackles, and was voted into the 2008 Pro Bowl in Hawaii.

Trufant now devotes his time to enriching his community via his Trufant Family Foundation.