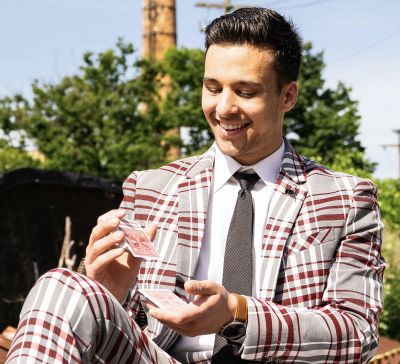 After performing his first magic trick at the ripe-old age of two years old, Jake Schwartz was instantly hooked on magic. He never grew out of the magic within the tricks, and Jake is now one of the fastest-rising young stars of magic in the country.

Jake is an international award-winning magician who has performed all over the world, including fortune-500 companies like CBRE Real Estate, the Philadelphia Phillies, the Philadelphia Union, the world famous Claridge Hotel in Atlantic City, and he was the youngest headliner to ever sell out the esteemed Smoke and Mirrors Magic Theater in Philadelphia.

Outside of being a world-class magician, Jake is a huge Philadelphia Flyers and Penn State football fan, and an avid musician.

You can experience Jake's incredibly fun style of magic by clicking the button below, and by connecting with him on LinkedIn, or following him on Instagram, Facebook, and Tik Tok @TheMagicOfJakeSchwartz to be kept up to date with future shows/appearances!