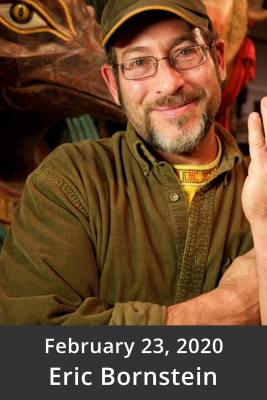 Award-winning mask maker Eric Bornstein of Behind The Mask Studio/Theatre specializes in custom made masks, corporate event planning, arts education, and mask theater programming. Eric has studied mask making with masters Agung Suardana in Bali, and Donato Sartori in Italy. He received his MLA in Fine Arts along with the Thomas Small prize from Harvard University. Behind The Mask was recently awarded the commission of 120 award statuettes for the prestigious Reggae Gold award event in Kingston, Jamaica. Previously, Eric was awarded a Fulbright award to revive and reinvigorate the art of giant puppet effigies in Jamaica 2017. He won the 2016 IRNE award for Best Puppetry Design for Company One’s Shockheaded Peter, and was part of the Liars & Believers team that won the Excellence in Production Design award at the New York Musical Theatre Festival 2012 for his masks in Le Cabaret Grimm. Eric was recently featured on the PBS hit show, Pinkalicious and Peteriffic. He is currently the artist-in-residence at the First Church Boston UU.