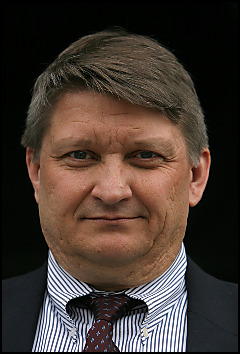 Dick Wadhams is a Republican political consultant who served as Colorado Republican state chairman from 2007 to 2011. He is also a political analyst for KCNC-TV/CBS4 in Denver and writes a monthly column for the Denver Post.

Dick Wadhams was born on August 26, 1955, the fifth of six children who grew up tending the family’s Las Animas farm, mostly sugar beets and livestock. Dad was a Republican; Mom was a New Deal Democrat until motherly pride in Dick’s career choice coaxed her to switch sides.

Wadhams financed his college years by working in a mortuary, so by the time he entered politics, making stiffs seem lifelike had become a well-honed skill. He attended two community colleges before earning his political science degree from the University of Southern Colorado (now CSU-Pueblo) and distinguished himself as a small-government iconoclast in the post-Watergate ’70s. He’s a cultural conservative and casually devout Catholic who doesn’t use issues like abortion or gay marriage as a litmus test for who he’ll represent. “I had no apologies for Nixon, but I’ve always felt Republicans believe in the freedom of living their lives without a lot of government, economically and every other way,” he says. His youthful devotion to conservatism led Bent County officials to offer him their GOP chairmanship when he was 19, primarily, he says, because “nobody else wanted to do it.”