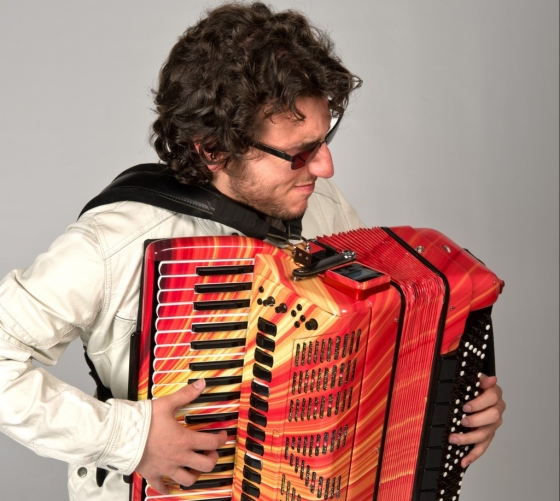 – World Digital Accordion Champion (Coupe Mondiale)
– World Acoustic Accordion Champion (Primus Ikaalinen)
*First Person to ever win World Championships on Digital, Acoustic, and Jazz Accordion
“No one is doing more for the image of the Accordion than Cory Pesaturo is.” NBC/FOX’s Maria Bartiromo

World Digital Accordion Champion (Coupe Mondiale) and World Acoustic Accordion Champion (Primus Ikaalinen) Cory Pesaturo (C Pez) is a graduate of the prestigious New England Conservatory of Music in Boston, MA, where he was the first musician ever to major and graduate in the accordion. Cory is in fact, the Only person to ever win World Championships on Acoustic Accordion, Digital Accordion, and Jazz. Accordion Legend Dick Contino said when Cory was only 15, “Of all the accordionists I’ve seen over the years, Cory is the one to pass the torch to, the only one who has all the tools to bring the accordion back to its former glory.” Cory’s main contribution, is his visionary thinking of how the accordion should be used, played, and presented in the modern music world. He is currently developing his own electric accordion, and already has made the first ever skinned accordion that includes a symmetric midi lighting system attached to the keys.

Pesaturo’s extensive resumé includes appearances at the White House for President and Mrs. Clinton on 4 different occasions, starting at age 12. On one of those occasions, he became the youngest person ever to perform at a State Dinner, performing with the Marine Strolling Strings for the President of Hungary. He has since performed at 7 other events for the Clintons and continues to keep in touch as proved by his 14 letters from the First family. Because of this, Cory is featured in Mrs. Clinton’s book “An Invitation to the White House”, which describes the State Diner performance. He has played every year at the prestigious Sergio Franchi Memorial Concert since he was 12, which is a deep connection to his Italian roots. For his travel, Cory has performed in 5 different continents, from Italy, to Canada, to New Zealand, to Japan and Tunisia, and regularly travels 75,000-100,000 miles a year. He has judged accordion competitions in the US, Canada, and Ireland, and has judged music competitions in general. Pesaturo currently gives masterclasses on both Music Theory and Accordion, and has taught at Harvard University, Brown University, UNC Ashville, Berklee College of Music, MIT and of course New England Conservatory.

At 11, Pesaturo got his first break, and opened at the former Warwick Musical Theater for the ill Myron Floren, the legendary accordionist on the Lawrence Welk show. In July of 2002 at age 15, Cory tied his close friend Steve Dominko, for the youngest ever National Accordion Champion in the US. A win in a concerto competition at the New England Conservatory of Music gave Pesaturo the rare opportunity to perform at the 2003 Christmas Pops Concert with the Brockton Symphony Orchestra as a featured soloist, where he became the youngest accordionist to ever solo with a symphony orchestra. Cory performed Tchaikovsky’s Violin Concerto; this performance can actually be seen on YouTube.

Cory is known as both a visionary and a rebel with the main United States “accordion world” much like Dick Contino was in his early days, and is outspoken with his dislike for the way the accordion is constantly presented, and also how the accordion world teaches the instrument in a manner that he says heavily discounts musicality and theory, further destroying the accordion image.
Concerning his Jazz side, Pesaturo recorded two CD’s with saxophone legend George Garzone and his famous band “The Fringe” at age 20, and has been performing with them in the Boston and Providence region. His performances at All of his World Championships were generally all improvised, likely a first in the world of accordion for major championships. Cory also won all of these, on accordions that were not his, most notably for the Acoustic championship in Finland, where he was denied to bring his instrument on the plane, and picked one up on arrival, mostly due to its color matching the outfit he planned to wear vs. the instrument being the right one to compete with.

Mr. Pesaturo is also heavily involved and respected with the weather and motor sports worlds as well. From 2005 to 2006, he composed the Official list of records set by the inconceivable record-breaking 2005 Atlantic hurricane season. He has also written the lists for the 2007 and 2008 Seasons as well. Moreover, he has put out a report and list of the 2009-2010 Winter Season for the United States. His is known for being a pioneer in the FreeSledding world with his own sledding mountain called “CN Mountain”, and has various other hobbies which he dedicates himself to. Furthermore, his music is regularly played on Formula 1 broadcasts on SPEED Channel and FOX, has an ongoing musical relationship with 98.5 The Sports Hub in Boston, has written the music for “The Flying Lap” for his friend, Formula 1 Legend Peter Windsor, and is currently working on a Formula 1 book that will change the way people look upon the sports history and its champions.