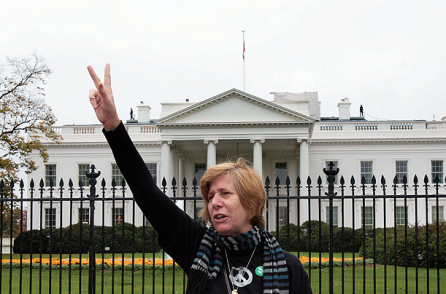 Cindy Sheehan, is the internationally known anti-war activist whose son Casey died in Iraq. Sheehan gained national attention in early August 2005 when she traveled to President Bush's Prairie Chapel Ranch just outside Crawford, Texas, during his five-week vacation retreat there. Demanding a meeting with the President and an explanation of the "noble cause" for which her son died, she created a peace camp called Camp Casey by pitching a tent by the side of the road and announced her intention to stay, day and night, for the full five weeks, or until such a meeting was granted. She has also promised that, if she was not granted a second meeting, she will return to Crawford each time Bush visits there in the future.

Since the first Camp Casey, Cindy has established or inspired similar camps and protests all over the USA. Her journeys on behalf of the Peace Movement have taken her all over the world - Australia, South America, Europe. In all her travels and talks, she touches on how the president has betrayed the American people and exploited the brave men and women in uniform to bring more profit to his friends. "My goal is to bring our troops home to try and save another mother from going through what I am going through."

THE OBAMA FILES: CHRONICLES OF AN AWARD WINNING WAR CRIMINAL
by Cindy Sheehan

The Obama Files is Cindy Sheehan's latest book. The book is a six-year long chronicle of the hypocrisy of the US Empire and the abdication of the "left" in calling out the war crimes of "the first black US president."

Cindy's work shows clear-thinking and understanding of the truth behind the Empire of lies, but this is not a book about "gloating:"  meant to awaken people to these truths that should be "self-evident" by now!

The Obama Files is now in its final stages of production and if you pre-order a copy today, you will get one of the first ones hot off the presses, signed by the author.

SPECIAL PREVIEW OF THE FOREWORD BY THE FABULOUS BROTHER LARRY PINKNEY:

Foreword to The Obama Files: Chronicles of an Award Winning War Criminal
by Larry Pinkney

Though often hidden or distorted, human history is replete with examples of courage and sacrifice by a relatively few political dissenters sounding the alarm and speaking truth to power. These dissenters are scorned and ridiculed by those who control the corporate mass media and its concomitant systemic machine of perpetual war, death, and destruction. Yet, US society in particular, and Mother Earth as a whole, are in dire need of these principled dissenters whose stories represent the very best of struggling humanity. This is the essence of Cindy Sheehan and why her actions and writings over many years are of such invaluable and enduring significance. She has repeatedly actualized the words of the late Dr. Martin Luther King Jr., when he said, “Our lives begin to end the day we become silent about things that matter...” 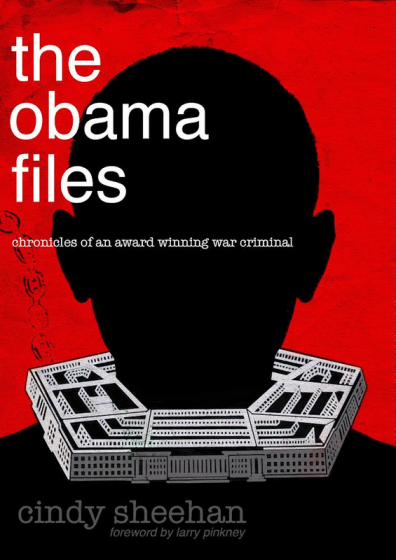