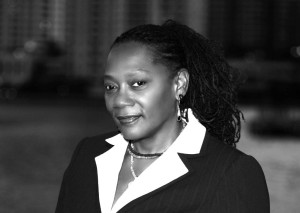 Ceresta Smith, an American University alumna, is a twenty-three-year veteran educator who has taught grades six through twelve reading and language arts, as well as beginning and advanced television production. Contact Ceresta at cerestas@yahoo.com or 786-303-4785. She earned her National Board Certification in Adult/Young Adult English/language arts in 2002 and now serves as a teacher leader and mentor.

In September of 2008, she moved from a school deemed “high performing” to serve as a teacher leader and literacy coach in a school deemed “low performing.” While there, she became a 2009 – 2010 recipient of a Jordan Fundamental Grant that facilitated the implementation of Text Titans, a literacy building initiative designed by her and funded by Brand Jordan. A private foundation created by basketball great Michael Jordan, Brand Jordan honors teachers who motivate and inspire students toward achieving excellence.

As a committed educator and activist, Ms. Smith founded the Concerned Teacher Coalition in 2009 to address the inequities in Miami-Dade County’s predominantly African-American public schools. One of the original organizers of Save Our Schools March and National Call to Action, she continues to champion for equity and quality pedagogy in America’s public schools.