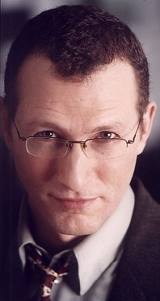 Brad Friedman is an independent investigative journalist, blogger, broadcaster, creator of BradBlog.com, co-founder of VelvetRevolution.us, expert on issues of election integrity, and a Commonweal Institute Fellow.

Brad Friedman is an investigative citizen journalist/blogger, political commentator and broadcaster. He is the Creator and Managing Editor of The BRAD BLOG. Among the many things that will be discussed, Brad will pose what he calls serious questions regarding the anthrax case.

Just some of the many notable national stories he’s broken on his blog include “The White House Website Scrubbing”, the “Tom Feeney/Clint Curtis/Yang Enterprises Vote-Rigging Scandal”, the story of the phony GOP front group, “American Center for Voting Rights”, the E-Voting Machine “Sleepover” controversy in San Diego’s Busby/Bilbray U.S. House Special Election, numerous explosive exclusives on whistleblowers such as FBI translator Sibel Edmonds, along with his well-respected, and widely-touted continuing coverage of various Electronic Voting Machine companies like Diebold who are destroying American democracy. He has filed, literally, thousands of stories on Election Integrity and Electile Dysfunction since at least November 3rd, 2004.

He has appeared in numerous documentary films, as well as on ABC News, CNN, CourtTV and elsewhere to discuss his reporting and expertise on a variety of issues. He’s a frequent contributor to the Huffington Post and has written articles and editorials for Mother Jones, Editor & Publisher, ComputerWorld, Columbus Free Press, Salon, TruthOut, Harvard’s Nieman Foundation of Journalism, Hustler and other non-pornographic publications and websites. In addition to live speaking engagements around the country, Brad has Guest Hosted on a number of radio programs for Peter B. Collins, Mike Malloy, The Young Turks and others. He’s also the host of The BRAD SHOW, a radio program co-produced with Internet news site RAW STORY and a frequent Guest on radio shows across the country.

Brad’s reports and breaking news from his popular website, The BRAD BLOG, are frequently cited by the national media.