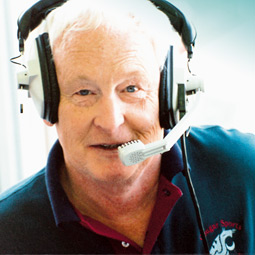 Bob Robertson and Cougar football. It’s a marriage that’s in its 48th season, and nobody is better associated with Saturday afternoons and Cougar football than the veteran sports broadcaster. And while Cougar fans have always shown their approval and appreciation for this play-by-play broadcaster, his peers have voted him Washington Sportscaster of the Year 15 times.

Robertson, who was inducted into both the WSU Athletic Hall of Fame and the Inland Empire Hall of Fame in 2001-02, and in August 2004, received the prestigious Chris Schenkel Award at ceremonies held at the College Football Hall of Fame in South Bend, Ind. The long-time Cougar broadcaster began his association with WSU football in 1964 and with the exception of a three-year period in 1969-71, he’s been calling the Cougar action ever since.