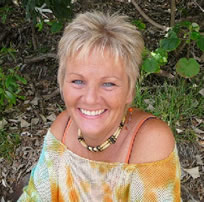 Blossom Goodchild is a professional ‘direct voice’ channelling medium working with spirit and cosmic energies. She has been channelling the Native American Indian Spirit Energy ‘White Cloud’ for twelve years now and shares his messages of Unconditional Love by means of personal readings and group meetings.

These meetings have been recorded and ‘White Cloud’s words transcribed and subsequently published in three books. ‘Walking in the Light and the Love’, ‘The Spirit of ‘White Cloud’ and ‘A New Dawn’.

In addition to ‘White Cloud’s guidance on how to live our lives to the fullest he has also given us, through Blossom , a series of guided meditations to help us tune in to our Higher Selves.

In addition to her spiritual work Blossom is also a wonderful actress, whose experience includes touring the UK in repertoires and musicals. Since immigrating to Australia in 2001 and settling in Noosa with her husband Goody and son Ritchie, she has firmly established herself as one of the finest actresses on the Sunshine Coast. Blossom has performed the one-woman show ‘Shirley Valentine’ as well as major roles in several David Williamson plays for the Noosa Long Weekend. She took on the challenging roles as the lead in ‘The Gingerbread Lady’ in which she won Best Actress and Performer of the Year for the Sunshine Coast Theatre Alliance STAR awards. She returned to the musical stage in Ian Mackellar’s ‘Now That’s Entertainment’ and has just finished performing in a world premiere season in Noosa in a new musical called MOMENTS, which was written for her and her co performer . Blossom is hoping to tour Australia with this production as and when the universe provides!!

Through all of these experiences, Blossom remains firmly grounded and with her easy laughter and warmth is a delight to be around