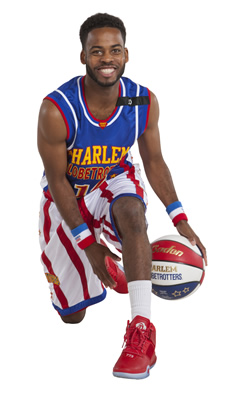 At the first ever Globetrotters player draft, Ant didn't even have time to finish his soda before he was handed a red-white-and-blue jersey. He was the first pick, and it's easy to see why. In the 2007 NCAA Division II championship, Ant pulled off one of the most awesome comebacks in basketball history. With 45 seconds left and his Barton College team down 74-67, Ant turned the game around. He scored 10 points and sank a lay-up at the buzzer to win 77-75.

But all that is nothing. When the Globetrotters were on "The Celebrity Apprentice," Ant stared down Donald Trump's hair and lived to tell about it.