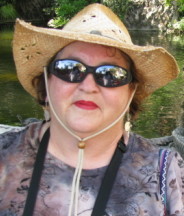 Anita is a licensed medical professional, artist, writer, blogger, photographer, New Media and Virtual Outreach expert. Anita is a USAF veteran and worked as an Intelligence Operations Specialist in the US and in Europe. She studied English, Film, Political Science and Journalism in college and has worked with the Tampa Bay Veterans for Peace, Code Pink Tampa Bay and the Tampa Bay Indymedia Collective. Anita was one of the first organizers for HANDS ACROSS THE SAND, a global initiative to stop offshore oil drilling and promote energy alternatives. From 2007 until 2012 Anita was on staff for three presidential campaigns, Kucinich (D), McKinney (G) and Barr (G). She has organized for the Green Party and has been a state delegate and a member of the Women's Caucus.

Anita works hard to change the course of our country by reforming our media and electoral processes and by organizing voters and promoting candidates that are not corporate "owned." She supports MOVE TO AMEND, a national organization that is working to abolish Corporate Personhood. Anita is currently serving on the Hillsborough County (Tampa Metro) Soil and Water Conservation Board. She broke records by winning the election on 11/2/10 with 82,404 votes at over 37%. She spent less than $300 for her campaign!

Anita is a continuing student of Permaculture, Sustainability and the Transition Town Movement. She continues her advocacy by working on increasing awareness about the human impact and the environmental aftermath of the Gulf Oil Spill. She just launched her new company, Power New Media and Public Relations, hosts her own radio show, Wise Women Media and runs a resale business. When she has any spare time which is rare she is knitting, crafting, reading, researching, walking, doing yoga, swimming, singing, gardening and exploring in nature with her camera.