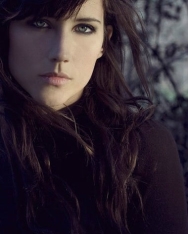 Angie Mattson grew up in Michigan being the eldest of eight siblings. While working at a recreation center she taught herself piano at age 14. In High School she sang and toured with a local theatre. While living on a boat in Florida she taught herself to play guitar. During her two year stay living on a boat and traveling in the West Indies, she began her song writing debut. Soon her songs became so popular that she made the move to Los Angeles where she recorded a demo with producer Rudy Haesermann called "Monarch." The demo caught the attention her now manager Michael Hausman.

Many of her songs could be heard in many films and TV Shows. Her debut album, Given to Sudden Panic and Noisy Retreat which includes noteworthy songs such as "Drive," "In Violet" and "Hiding Cards" was produced by Nathan Larson and was released by her independent label Radio Nine Records in 2007. Her music is wide ranged in genre from soul to folk to blues to rock and all the above. Many have tried to compare her but once you've listened to her music, you will be captivated by both her sound and ballad.

Angie can also be found in many films including 2003 Chris Rock's "Head of State."