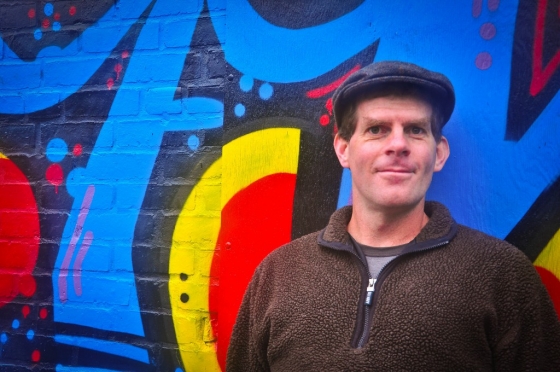 Since 1997 Alex Cook has created over 110 murals in 15 states and 4 countries (USA, Kenya, Nigeria, Guatemala). Alex’s work focuses on community and spiritual themes expressed through nature imagery and storytelling.

In 2004 Cook founded Art Builds Community, a mural painting program for teenagers in his hometown of Boston, MA. ABC hired teens during summers, teaching them the skills of mural painting and creating many murals in the neighborhoods of Boston and surrounding areas.

Over many years Cook has taught art and creativity to children and adults in many different situations ranging from alternative high schools and court-ordered community reintegration programs, to after school programs and summer camps.

His work in education and the powerful experiences of creating art in public have caused Cook’s artwork to become deeply social. Many of his mural projects include community participation during which community members are invited to make their contribution to a larger artwork within a structure. For Cook, painting is only half of the art – the other half is creating environments in which community members feel the love of connection and creation. Past collaborations have been with community groups, schools, churches, prisons, youth organizations and many more.

Cook is also an inspired musician. Between 2008-2013 he wrote and recorded 5 albums of original Bible-based music and performed over 200 concerts in the US and abroad. Cook has brought his music ministry to churches, community centers, prisons, homeless shelters and street festivals.

Between 2007-2014 Cook served as a chaplain at the Nashua Street Jail in Boston, MA. There he led groups and individuals in Bible study, prayer, and gave pastoral care to detainees.

One of Cook’s current endeavors, the YOU ARE LOVED mural project, makes murals whose image is simply the words “YOU ARE LOVED”. It began as a mural message to students in an elementary school in New Orleans, LA, and has grown into a project working with communities all over the US to influence public conversation about self-worth and value.

Learn More About Our Guest Alex Cook at: www.stonebalancer.com and www.youarelovedmurals.com