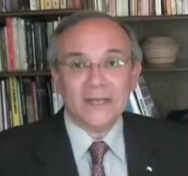 Adrian Salbuchi is an internationally-renowned Argentine author, political analyst, speaker and radio/TV commentator. His articles are widely published and translated in different countries and he regularly appears on such TV channels and Russia Today and Press TV to comment on a variety of international issues. He is a regular contributor to the Montreal-based Center for Research on Globalization and the New Dawn magazine. He is also founder of the Second Republic Project in Argentina, which is expanding internationally.

Adrian is host to several radio talk-shows, notably, El Traductor Radial and Bienvenidos a la Jungla, and has spoken in hundreds of conferences, panels, congresses, and seminars at universities, schools, NGOs, the Argentine Army and Air Force War Schools, and political and economic centers throughout Latin America. He appears regularly on local television and radio programs. A series of his videos in English and Spanish on these subjects is available on YouTube. He is the founder of the Movimiento por la Segunda Repblica Argentina (a political project to found a Second Argentine Republic as a necessary initial step to overcome Argentinas present difficulties). Adrian lives with his wife in Buenos Aires and has four adult children. His web site is www.asalbuchi.com.ar, where many of his English articles have been posted