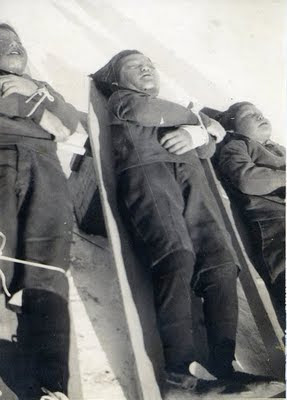 “Of course they did it. Look at how they act now. It didn't matter to them then and it doesn't matter to them now” - Protester at Christ Church Anglican Cathedral, Vancouver, on Aboriginal Holocaust Remembrance Day, April 15, 2007

"There is none who are righteous or who understands, there is not even one who seeks for God. All have turned aside and together they are useless, for none do good." - Romans 3:10-12

Most of the other young boys on my street never did the actual killings, but they knew about them. They even stood around and watched. The City of Winnipeg was paying for the slaughter, which may have had something to do with its normalcy and popularity among my fellow pre-pubescents. After all, who would pass up a chance to make a quarter from every prairie dog tail sliced off a still-quivering little brown creature?

The bigger guys among us wielded the mops or wrenches that shattered the captured animals' backbones, and the rest of us were encouraged to dive in with our Swiss army knives to finish the job and claim the fluffy bounty. I was one of those who didn't, but who nevertheless stood by and watched fascinated and with a suspended horror at the bloody ritual. The glazed and happy look of contentment in the eyes of the killers has never left me, nor have the dying squeals of the little creatures as each blow fell.

Everyone in our neighborhood knew about the killings but never talked about them, especially those who'd participated and cashed in. Yet a sickly haze hung over all of us. We were lessened because of what we'd done, just by living alongside it. And looking back, it seems that we were all living precariously every day as if awaiting a knock on the door by some higher judgment.

It finally came in the person of Mrs. Wyatt, a local mom who'd found some bloody animal remains in her alley and tracked down the source. The woman raised a passionate public stink about the prairie dog slaughter and without pointing her finger made us feel our collective culpability for the first time. And we all hated her for it.

We briefly shifted our aggression away from the local rodent populace to Mrs. Wyatt's doorstep, where we began leaving assorted garbage and obscene messages. Our parents aided our take-down campaign by publicly badmouthing and then shunning the woman, who'd brought such discord to our once self-satisfied community by “making us all look bad”. She of course was the problem, not us. And so after a few months of harassment the inconvenient woman and her family moved away, and the killings carried on.

Thus at ten years of age did I learn an essential part of what it means to be a Canadian: that the problem isn't what is going on but that somebody has talked about it.

Perhaps as part of the judgment hanging over my shamed young mind, that essential Canadiana kept seeking me out and admonishing me with the same fervor with which we had assaulted good Mrs. Wyatt. The deeper I gazed into our neighborhoods the more slaughter I encountered, and the same industry of rationalization and routine behind it all.

Murder had not been called murder when I was ten, but “a rodent control program”. The same safely-euphemized mental buffers have allowed the bigger crimes to continue alongside and because of our terminal Canadian niceness, as genocide becomes "cultural insensitivity" and mass murder is called "abuse". And so when I began to understand Mrs. Wyatt after uncovering more than rodent remains on my doorstep, I was officially warned. Just prior to my own immolation and banishment, I was told that there really was no cause for any concern besides the fact that I was mentioning the unmentionable. Otherwise, things were just fine.

What prompted this reflection was a question put to me by an unsuspecting interviewer, who asked me how my view of Canada has changed after twenty years of exposing what she called "our rotten underbelly".

"We're a nation of psychopaths" I replied. "All of us. Dead children are dead children."

Or dead prairie dogs, for that matter.

I've waited unrequited over those long years for a single tear of grief to emerge from out of the mountains of words, political posturing and Royal Commissions into our own home grown bestiality. At the end of the day, nobody is bothered by the heaps of little corpses rendered so by our own hands, any more than my Winnipeg neighbors were upset about our extermination of our innocent little  neighbors. What causes my people to become emotional is when I keep talking about their everyday carnage.

Those years have also brought me a strange resignation, not from despair but a blinding realism, an awakening to that of which I am part. My training on an Acute Psychotic ward prepared me to spot all the signs.

Caught up in the general madness, I absurdly appealed to the conscience of the conscienceless. I sought something that was never there. But even more horrible was my discovery that my own heart shared the same void; that the nightmare was reduced in my mind to sterile words likegenocide, war crimes and legal liability. My heart, like those of my own dead and dissociated people, was in suspension somewhere.

Yet still somewhere in my memory echoes the unanswered scream of the innocent as their backs were shattered by drooling and laughing boys with blood-soaked mops; and of my own outraged despair as I find what the years of accommodation have done to me. For it has been the suffering of little rodents that has most moved my heart, rather than the screams of my own flesh and blood.

The carnage begins first in ourselves, for it emerges from there. Why then is there no balm in Gilead; no healing for me or for my people?